My rucksack that I purchased through eBay arrived in the mail today. And after the kids went to bed, I got busy transferring everything from the hard case into it. 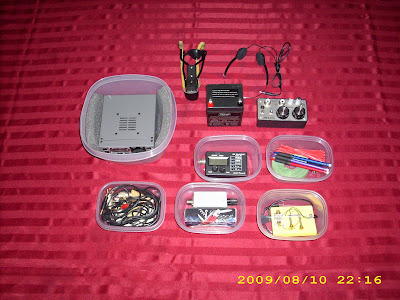 This first photo shows just about everything I had in the hard case transferred into plastic containers. Starting at the top left is the K1, the container next to it is holding my Autek antenna analyzer, then pencils and miscellaneous stiff, the next has jumpers and wires and cables, the next after that has a 4:1 balun and my ever present Swiss Army Knife and the last is holding a single lever paddle (on the yellow wooden base). Up at the top you can see my slingshot, the battery, headphones and ZM-2 tuner.

This all packs very neatly into the rucksack, which appears immediately below: 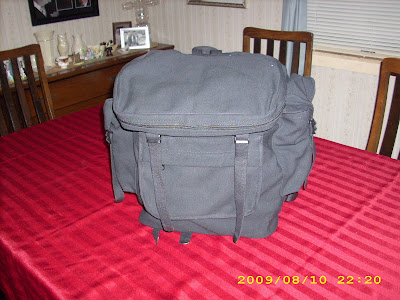 What you can't see added to the inside is a legal pad for taking notes and my solar panel which doubles as a nice support and keeps the pack from being all mushy and fallen over. I'd estimate that everything altogether weighs around 12 pounds or so; which is not bad. There's still plenty of room inside to toss in the Zip Cord 88 or the NorCal doublet; or even a HWEF antenna.

I got on the air yesterday afternoon to tune around and listen to the Worked All Europe contest. There still are a few European countries that I have not worked QRP yet; and I was hoping I might get lucky. I was using search and pounce and did end up working Belgium, which I have worked many times - but never QRP. I heard a station from Finland, which I need via QRP; but he was also searching and pouncing. I was tempted to give him a quick call; but it my mind that would have been interfering with the station "running" the frequency, and would have been in bad form.

That brings me up to 94 worked via QRP CW and I only need six more now for QRP DXCC.