A couple of years ago, when I won my Icom IC-208 at the Sussex Hamfest, I needed to by a new dual band antenna. 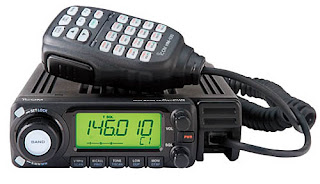 I previously had had a Yaesu 144 MHz monoband rig in the car. So when I swapped rigs out, I scrapped my Radio Shack 5/8 wave 2 Meter antenna (which was a SOLID performer, by the way) and went with an "inexpensive" (cheap) Diamond dual band antenna. At the time, it was all I was able to afford, and since I did way more listening than talking, it served its purpose rather well.

Lately, since I've been doing a bit more talking, I have once again come to realize that the old adage, "You get what you pay for" still holds true. I find my self boosting power when I feel I shouldn't have to. A better antenna would allow me to get into the repeaters that I want to get into with lower power. So about a week ago, I purchased a Comet SSB5 antenna with a PL-259 mount, thinking that I could save a few bucks by re-using my old Radio Shack magmount, which is also PL-259.

Wrong! I received the SSB5 radiator the other day, only to find out that the connection at the bottom is male and that the "post" sticking out of the Radio Shack magmount is also male. I suppose I could use a double female barrel connector, but decided to go with the proper magmount base instead. It should be here some time this week; and hopefully it will be the antenna on top of the Explorer this time next week.

This radiator is 42" tall as opposed to the mere 19" radiator that I have now. It's always better to improve the antenna over boosting power; so I should be in good stead in a little while. Once again, my attempt at frugality has cost me some time.

I also downloaded the NØNBH propagation widget for my Windows sidebar this weekend. Looking at it, I see that the solar flux is headed down the pipes at a current level of only 68, even though the sunspot number is at 25. When the solar flux dips like that, it sure makes for poorer propagation. I can't wait until Ol' Sol makes up his mind as to what he finally wants to do and starts being a little more consistent.