The South Plainfield Labor Day parade went without a hitch this morning.  Our CERT team was out in force, relaying communications to the parade organizers, relaying changes about the line up to the parade announcers; and just helping out in general, where ever help was needed.  Unfortunately, there were a lot of line up changes to be relayed as many groups scheduled to participate, just never showed up.  I don't know of it was due to the chance of impending inclement weather or what; but it was a shame to see so many scratches and no shows. 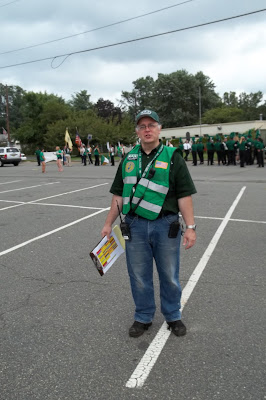 Me, all CERTed out!
The fireworks show for tonight has already been preempted.  I would guess that the folks responsible are going on information that heavy rain is supposed to come in at some point this evening; but right now, as of 4:00 PM, it's a bit overcast with the sun peeking through every now and then.  There are going to be a lot of disgruntled citizens if the rain holds off.  The parade and fireworks have been a Labor Day tradition in South Plainfield for over half a century now.  Folks in this town don't take too kindly to folks messing with their traditions.

The forecast for tonight through Thursday is for heavy rain, however.  The possibility for over 2 inches of rain alone tomorrow has been made known on AccuWeather.com.  I certainly hope that no one's basement ends up flooding again.

Tonight, there are two QRP Sprints taking place for those who are inclined to such competitions.  The monthly Adventure Radio Society Spartan Sprint is tonight, as well as the Michigan QRP Club's Labor Day Sprint is tonight.

I noticed that my Butternut is slightly out of vertical after Irene's visit.  It's caught is some small branches of a bush that is overhanging from the neighbor's yard.  Looks like there will be some pruning this upcoming weekend (weather permitting).

Jeff KE9V has announced that he will be discontinuing blogging for a bit as he begins to work on new projects.  His "Cornbread Row" series is available for download from his site.  Jeff is an extremely talented writer.  I'll miss his posts.