It's raining like crazy again, only one week after Hurricane Irene.  This time, were experiencing the remnants of Tropical Storm (actually, Tropical Depression) Lee.

I have found some videos on YouTube that fellow South Plainfielders posted of the flooding in our town.  This will give you a small idea of the effects of Irene on our little town. 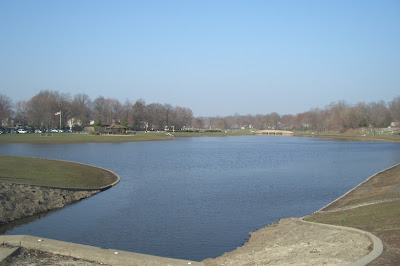 The gazebo and flag pole to the left of the picture were completely submersed.

When we first decided to move to South Plainfield, we came VERY close to buying the house all the way at the end of the street on the right of this street:

Needless to say, I am glad we didn't!

This is, aptly named, Lakeview Avenue. The building with the big tower behind it is Boro Hall.  To the left of Boro Hall is the Rescue Squad building, where the EMS rigs were evacuated from just in time.

This video, which is the longest, was taken from Lakeview Avenue, looking TOWARDS where the other video was taken from.  Our Monument Park is under water, you can see the Rescue Squad building in the background and more footage of the rain swollen Spring Lake Park.  All the walking trails and recreational areas were under a minimum of 6 feet of water.

There are many other areas of town that were affected just as badly.  If you drive around town, you can see heaps of piles of what is now garbage that people have had to remove from their houses because of flood damage.