I had a real good time during the 1st Annual Skeeter Hunt today, although the outlook appeared bleak from the very beginning.  Just as I was heading out the door to go to the park, our vacuum cleaner decided to give up the ghost.  It made a real funny noise and a burning smell.  I tried troubleshooting it quickly; but it turned out we needed a new one.  Of course, my XYL didn't want to wait; so it was off to Target to buy a new one.

That chore taken care of, I headed to the park (dressed in my WGØAT "Old Goats Rule - QRP Adventures" T-shirt!) - nearly an hour and a bit into the contest.  Fortunately, everything after the vacuum cleaner incident went as smooth as butter!

The weather here in Central NJ was gorgeous!  A high of about 84F with sunny, blue skies and lots of white, puffy clouds.  The humidity was not bad, and the only Skeeters that I had to worry about were the ones on the airwaves.

The wrist rocket got a line up over a pretty high tree branch on my first attempt.  The PAR antenna went up without any trouble at all and and didn't even cause the KX3's autotuner to even so much as burp - 1:1 SWR on both 20 Meters and 40 Meters.  The little box to the right of the KX3 is the PAR matchbox.  I used my Whiterook single lever paddle today.  And of course, you can see Ol' Blue, my battery, up there in the upper left hand corner of the camping table. 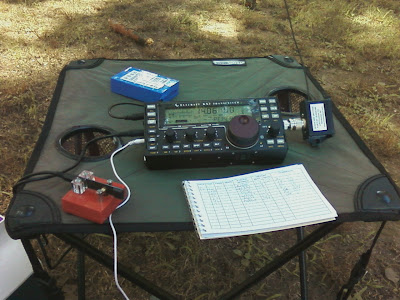 And the good SWR on 20 and 40 was a very good thing, because unlike the Flight of the Bumblebees, I was to find a lot of activity on 40 Meters.  In fact, a little after 20:00 UTC, 20 Meters became dominated by European stations and I was barely able to hear any Skeeters on that band after that point. 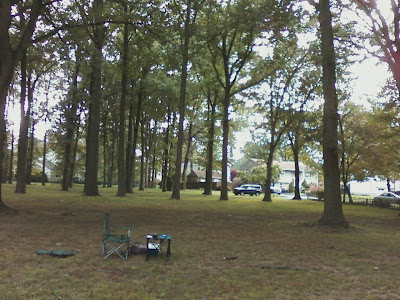 Tear down was just as easy as set up.  After the contest ended, I was able to pack up things and be out of the park in less than 10 minutes.

I would like to thank all of you who took the time to participate in this first ever NJQRP Skeeter Hunt.  I think a good time was had by all; and this will definitely become an annual Summer QRP event.

Remember, logs are due by September 12th, after which I will post results.  Log summaries are fine - details of each QSO are not necessary - but if you want to send a log in that way, that's OK, too!  And any pictures, especially those of you who home brewed keys for the event will be greatly appreciated!

I've gotten a few logs in already and I hope to get many, many more.  In fact, Jim W1PID, posted another of his great stories today - this one about the Skeeter Hunt: