2012 Zombie Shuffle has been moved 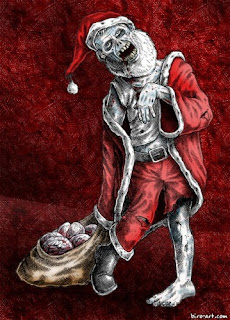 
"Zombies, World Wide DX Contests, Sweepstakes, etc. made it impossible to schedule a nice, enjoyable Zombie Shuffle around Halloween, particularly on the traditional Friday evening. We were ready to schedule it for this Friday, Nov. 7. Then came Hurricane Sandy that has left some of our QRP friends without antennas, and some still without electricity. I have been unable to email two of our arranged Elvis stations, presumably due to no electricity or internet yet. I don't know how many are still recovering from Sandy.
So here's the deal ...

That's right, the very last day of the Mayan calendar, which conveniently falls on a Friday. As most of you know, this could very well be the end of the world. At least that's what they say. Zap - lights out for the human race. What a better way for a QRP Zombie to go than with his/her earphones and boots on? When the great galactic cataclysm or Planet X hits, I want to be on the air. Vaporized with all my QRP Zombie friends. I know you feel the same.

No major contests that night; hopefully a few hours on the air the Friday before Christmas won't interfere with your family or holiday plans. It might even keep you out of WalMart or Target for the night. That probably just saved you $150!

I'll update the rules, summary sheet and website this weekend and get them posted. If you have any unique ideas for the Zombie Shuffle on how to spend your last few minutes on planet Earth, let me know.

In the meantime, if you don't have a Zombie number, you can request one by an email to Jan, the Witchess and Grand Zombie at n0qt@arrl.net. Don't wait - this could be your last chance. Nobody wants to go out without a number!

PS - In the slim chance we survive December 21, we'll have a regular old Zombie Shuffle again next year, likely the Friday after ARRL Sweepstakes."

So there you go - I know Christmas and Zombies aren't what you'd call a "good fit" - but Paul humorously tied the event into the end of the Mayan calendar - or have some have called it - "The Coming Zombie Apocolypse"!  In any event, it's always a fun sprint.