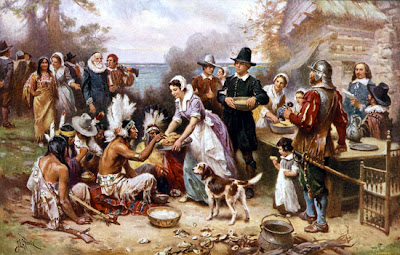 I really like Thanksgiving – it is my favorite holiday.

I know that I have many readers that are not from the US, who might have heard of Thanksgiving; but might not be familiar with the history behind the holiday. Here’s a short and by no means authoritative version, of the US version of Thanksgiving. Our Canadian friends also celebrate Thanksgiving (on the second Monday of October); but the historical basis behind their celebration is different than ours.

In the year 1620 a small ship named the Mayflower, left Plymouth, England and headed for “The New World”. The passengers were mainly a group of people known as Pilgrims, who had left England to come to a new land where they could practice their religion publicly without oppression or harassment. The rest of the passengers were people who wanted to come and settle a new land and make a life for themselves.

The Mayflower landed at what is now known as Plymouth, Massachusetts in November of 1620. Shortly after landing, the settlers came in contact with an Indian (read – Native American for the PC crowd) who was a member of the Abenaki tribe. A few days later this Native American returned with a friend named Squanto, who was a member of the Pawtuxet tribe. Earlier in his life, Squanto had been kidnapped by an English sea captain who had sold him into slavery. Squanto escaped and managed to get to London for a time, where he was able to successfully find a way to get back to America (and learn the English language in the process). Squanto introduced the Pilgrims to the nearby Wampanoag tribe. With Squanto’s help, an alliance was formed between the Wampanoag and the settlers which lasted for a period of over 50 years. If this alliance hadn’t been formed, the settlers probably would have totally perished that first harsh Winter. Even though the Wampanoag chief, Massasoit had donated food and provisions to the settlers to see them through that first brutal and snowy cold Winter, almost half of the passengers of the Mayflower perished from scurvy, malnutrition and other disease.

The following Spring, Squanto and the Indians taught the surviving Pilgrims where to fish, how to catch eels, how to plant corn, barley and other crops, which indigenous plants were poisonous and which were not, among other things. The planting and growing season of 1621 proved to be exceptionally good, ending with a bountiful harvest that would, without a doubt, be more than enough to sustain the Pilgrims through the next Winter. The leader of the settlement, Plymouth Plantation, declared that a feast be held that November. It lasted three days and the Native Americans were invited to celebrate the bountiful harvest; and 90 came. The Pilgrims had just completed a “Fowling mission” and the Wampanoag brought five freshly killed deer – so the menu from the First Thanksgiving feast (according to written records) consisted of venison, turkey, goose, duck, various fish (cod and bass among them), eels, clams (quahogs), and fruits and vegetables. As the Pilgrims stores of sugar were used up, there was probably not much in the way of pies or cakes!

Days of Thanksgiving have been proclaimed on and off throughout our history, beginning during the Revolutionary War. But Thanksgiving, as we come to know it, came into its own when a national Thanksgiving Day on the last Thursday of November was proclaimed by Abraham Lincoln in 1863. And since that time, it has been celebrated annually.

On a radio note - last weekend, I tried hauling up the W3EDP without much success.  Trying to bring down the short end of the frayed and snapped Zepp was futile as it is unmercifully snagged in my neighbors trees and bushes.  So a new plan evolved, which I will try to implement this coming weekend.  Instead of using the mast on that side of the yard, I will run the W3EDP from the house to the maple, horizontally (actually sloping slightly upwards).  Then from the maple, I will allow it to slope down towards the privacy fence post in that far corner of the yard and will tie it off with however much antenna rope I will need - probably no more that 5 -6 feet worth.

I am hoping that the old saying will hold true - "Where there is a will, there's a way!"