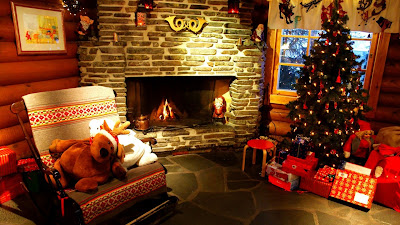 Christmas Eve came and Dave and his dad attended Midnight Mass together. Jason sat in one of the pews while Davey pulled duty as an Altar Server.  The next morning, they opened up their gifts to each other. Jason was very pleased with the gloves and hat and scarf that he received from Davey. Likewise, Davey loved the books and video games that his Dad had given him. He knew that money was tight this year, and he appreciated all his dad had given him.

While cleaning up the breakfast dishes together, his dad reminded him that they would be having dinner over at the Mason’s later in the afternoon. “You know that the Masons invited Jimmy and the Stapletons over for dinner too, right?”, His father asked.

“Yes, sir”, Davey answered, “It was nice of them to do that.  I have Jimmy’s kit all wrapped up and under their tree, so that when Jimmy gets there, he can open it.  He has no idea ……. this is going to be great!”

Then his mood changed and he got quiet, and after a few moments, his dad said, “I know Davey, I miss her too. Your Mom and you are the most important things in my life. I love you both so much – you’ll never know how much.  Just know that she’s looking down on us and is glad that we’re celebrating her favorite holiday together.”

Dinner at the Mason’s was a feast.  Mrs. Mason, who was by any measure a great cook, outdid herself.  There was a turkey, there was a ham, there were mashed potatoes, gravy, yams, cranberry sauce, vegetables and home made buttermilk biscuits.  For dessert there were three kinds of pie.  Nobody could outcook Mrs. Mason. Everyone enjoyed the meal and the friendship.  After they had all stuffed themselves to the gills, Mrs. Mason called everyone over to the tree.  “Santa was here last night and left some presents!” she gleefully informed her guests.

There were presents for the Stapletons, who were overwhelmed and didn’t know what to say.

“Don’t say anything”, George said.  “Jeannie and I know what you’re going through, we’ve gone through it a few times ourselves over the years; and with God’s help, we always got by.  Some day, when things are better, you do the same for someone else.”

Then Davey handed  Jimmy a gift wrapped box.  Jimmy took it eagerly, “Oh man, I wonder what this could be?”

“Well open it up, knucklehead!” Davey kidded his friend, “Unless you’re like Superman and have X-ray vision, you’re never going to know until you do.”

Jimmy unwrapped the gift and saw that it was a kit for a QRP Tri-band transceiver, a popular model by famed QRP designer Steve Weber KD1JV. “Davey, are you nuts? This must have set you back a ton!”

“Hey buddy-boy, don’t yell at me, yell at Santa, he’s the one who brought it here”, Davey glibly replied.

“Yeah, well, “Santa” is the greatest friend a guy can have – tell him I said so the next time you see him”. Jimmy looked at his friend with a stunned look of disbelief still on his face.  Mrs. Stapleton had a few tears welling up in her eyes, overwhelmed by the generosity of their friends.

Davey told his friend, “Santa wasn’t able to dig up an antenna tuner or a paddle, though. I’m afraid you’re going to have to come up with those on your own”.

That’s when Mr. Mason chimed in ”I’m sure that there’s enough stuff in the N2EBA parts box, that we can come up with a QRP antenna tuner. And if I’m not mistaken, Jimmy, I think Santa left you another box under the tree”.

This time, George handed a small box to Jimmy.  When Davey told George what he was up to, their Amateur Radio mentor decided to buy Jimmy a Bencher paddle to go with the rig.

Jimmy looked at them, “The both of you are the best. Thanks so much!  This has been a great Christmas!”

Then Mrs. Mason came over to Davey and whispered something in his ear.  With a quizzical look on his face, he moved over to the Christmas tree when he heard her say, “Go on, Santa left one for you, too.”

Davey found the box with his name on it.  Caught totally off guard, he sat down on the floor next to it and began to remove the brightly colored wrapping paper.  He caught his breath for a second when he saw what it was – the Elecraft KX3 kit that he had wanted so badly!  He immediately looked at his dad, who simply nodded and said, “There’s a note attached to the box, Davey.  I think you might want to read it”.

He opened the envelope – inside was a plain sheet of paper with handwriting on it – his mother’s handwriting.  She had written the note shortly before she died.

With all that has been going on, your Dad and I decided that we wanted to buy you a very special Christmas present this year.  We both know that this is something that you’ve really wanted and that you were trying to save up for on your own.  We also know that you’ll get a lot of enjoyment from this for years to come.  So no matter what happens, or wherever life takes you, please know in your heart how much your Dad and I love you.

My love always and Merry Christmas!

This time, Davey was the one caught speechless. With tears glistening in both their eyes, he looked at his Dad, and his Dad looked back at him.  Both had smiles on their faces. As much as he had wanted the radio, that small piece of note paper with his Mom’s handwriting  that he had just received, and what it represented, meant more to him than anything in the world. Dave Bolton still missed his Mom terribly, but now he knew that she would always be with him.

“You’re right Jimmy”, he said, “This IS a great Christmas”.

Note: The names and call signs that appear in this story are purely fictitious with two exceptions. Steve Weber KD1JV continues to design kits that are sold primarily through Hendricks QRP Kits. N2EBA was originally issued to Mark Rosenwald, a good friend of mine who is now a Silent Key.  Thanks Mark, and a Happy Hannakuh to you, in the Big Shack in the Sky!