It was a two fur night

We had two excellent Foxes, Jim N0UR in MN and Chris W0EP in MS.  I heard Jim right off at the beginning of the hunt, and I think I was either the second or third Hound to nab a pelt. Chris took a bit more effort. I was hearing him fine - 569 in fact and getting stronger. But call as I might, I was not being heard.

Finally, it dawned on me to switch antennas. I had worked Jim so easily on the 88' EDZ that it seemed natural to use the same for Chris. When I switched over to the HF9V, Chris was a little weaker on receive, but within three calls I had him in my log. It turns out that I hadn't read the Fox announcement close enough. If I had paid attention, I would have read that Chris was using a vertical last night.  If I had switched antennas earlier, I might have had logged him earlier - but who knows? 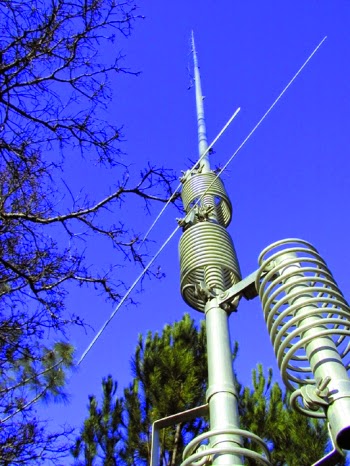 Once again, a lesson that propagation is not always reciprocal. Just because I heard Chris louder with my wire didn't mean that he was hearing me as well as I was hearing him. Obviously, the results show that he heard me better using an antenna upon which he was not quite as loud to me.

Lesson learned - don't ignore any arrows in your quiver. Use them all, even if it seems like it shouldn't work.