After working the QRP Fox Hunt last night, and over time working a bunch of DX and a lot of the W1AW Centennial WAS stations, and other pile up causing stations - I really have to wonder what goes on in the minds of some people.  It seems like when there's some kind of quarry to be had, whether it be a QRP Fox, a DX station, or a W1AW/XX station - common sense goes right out the window and sheer insanity takes its place.

Take for instance last night.  I was trying to work Steve WX2S on 40 Meters who lives about 18 miles from me.  Ground wave was strong enough that he was about a 229/339.  The advantage was that not only could I hear him, but I could also hear the stations that were calling him.  I ended up not working him, but even so, it was a unique opportunity to observe.

Steve was working split from the beginning and he was handling the pile up deftly.  But I was left shaking my head, because so many times - all through the hunt, people continued throwing out their calls while Steve was engaging another station! I sat there, kind of dumbfounded. There was Steve, sending out "559 NJ STEVE 5W" to whomever, and all the while there were stations sending out their calls, over and over and over, without so much as taking a breath!

So here's the deal......if you can't hear the quarry well enough to realize he answered someone other than yourself - then why the heck do you continue to throw your call sign out there in the first place? Obviously, if by some miracle, he actually came back to you - would you be able to hear that well enough to realize it and complete the exchange? Something tells me ........no. 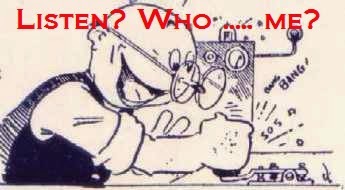 Part of pile up discipline (on the part of the chasers) is to realize when you have a legitimate shot. But in any case, whether the quarry is 229 or 599 on your end, don't you think it would be a lot wiser to send your call maybe twice at most and then take a break to actually listen?

Listening. That seems to be a dirty word in the minds of a lot of folks.

Look, I know we all make mistakes and I've made my fair share, too.  No one is perfect, and I can understand forgetting to turn the "split" function on or some other such thing.  But deliberately sending your call over and over and over in the vain hope of somehow scatter-gunning the target is really just inexcusable, and rude and inconsiderate of your fellow Hams.

As always, this is just my humble opinion. Your mileage may vary.