going on. Unfortunately, it's been all non- Ham Radio related. So my blog has been kind of at a stand still. For that, I apologize.

We have one of those little baby fences situated in the doorway between our kitchen and our dining room. It's there so that Harold, our spoiled rotten Beagle (and I say that affectionately) won't wreak havoc in either the dining room or living room. He's just over two years old and still has so much of that puppy vim and vigor (and mischief) inside of him. A few weeks ago, right on Thanksgiving, I was attempting to swing my leg over that fence while simultaneously carrying a full platter of carved turkey.  I didn't quite clear the fence and snagged my left leg on it.  At the time, I really didn't feel anything searingly painful and didn't give it much of a second thought.  A day or two later, I really began to feel it!  I not only twisted my knee a tiny bit, but I also caused untold grief to the hamstring and upper calf muscles of my left leg.  Getting old is not what it's cracked up to be! 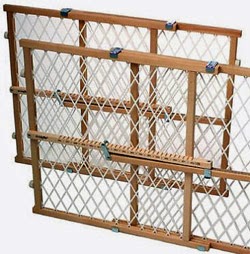 For about a week, I was actually hobbling around with a cane. I could bend my leg, but only with effort and major discomfort.  My wife suggested going to the doctor, but I knew what I had done - severe strains of said muscles. If I had ripped or torn anything, I would have immediately folded like a house of cards, and that wasn't the case. Until this past weekend, it was a basic routine of coming home from work, sitting with my leg elevated and applying a heating pad. Advil has been a big friend of mine.

The good news is that my condition has been improving each day and last Friday was the last day I needed to use the cane. I can walk now almost without limping.  I'm at about 90% back to normal  and any discomfort that I experience is minor and lasts only a few seconds.  I can walk up and down stairs relatively pain free. That was a major impediment to getting on the radio!  The shack is in the basement and in the last week, I was only down there twice.  Last Thursday to work one of the two 80 Meter QRP Foxes and last Sunday to check out the 10 Meter contest.  I totally blew off last Tuesday's 40 Meter Fox Hunt, but didn't miss anything as both post-hunt logs showed no East coast Hounds worked.

Like most of you, I found 10 Meters to be hopping over the weekend, but I had so much else to do in preparation for Christmas, that I could not devote any time to my most favorite hobby. Hopefully, as more gets moved from the "To Do" list, to the "Done" list, that will change.

In the meantime, I've noticed that cane is aluminum and since I don't need it for support anymore, I'm wondering how it might load up?!? Just kidding!