My ARRL DX Contest effort was almost identical to that of fellow blogger Mike VE3WDM.  Limited amount of time, and not what you would call a "serious" effort. I don't know what it is with me, but after about two or three hours in the chair, I get antsy and have to get away.  I guess I just don't have it in me what it takes to be a contest monster.

I put in five brief sessions over the weekend, in between chores and other commitments. A very brief effort Friday night, a longer one Saturday morning, a short one both Saturday afternoon and then another one after dinner on Saturday evening.  Then I put in a short effort on Sunday morning, probably just a bit longer than what I had done Saturday afternoon and evening.  I didn't keep track of my time, but if the sum total was more than four hours, I'd really be surprised.

My plan of attack was to tune from one end of the band to the other, listening for stations who I thought would stand a good chance of hearing me. If the station didn't hear me after three or four tries, I moved on.  Happily, there weren't many times that I had to "move on", maybe three or four all weekend long. Conversely, there were also a few instances where I heard a station calling CQ in the clear, and based on their signal strength to me, I was fairly certain they would not hear me calling. Surprisingly, they did. That was cool, I like to be wrong in instances like that!

My Saturday morning/afternoon effort was interrupted by computer problems. As stated recently, my shack computer is now the family computer upstairs. I had resorted to employing an old Acer Aspire One for shack duty and it seemed to be working well last week.  However, adding a lot of contacts to the log in a short amount of time caused its processor to have serious problems. I would type in a call and there would be a lag before it appeared on screen. Several second lags resulted between pushing the tab button and the cursor moving between fields.  This was annoying to say the least, as I was attempting to log in real time, instead of logging on paper and entering the data later.

I ended up turning the radio and computer off and shutting the whole works down. I dug out and resurrected my old HP laptop, which is physically and cosmetically beyond its last legs, but electronically in relatively decent shape - as it has a much faster processor than the Acer. I propped up its screen as the hinges are broken, plugged in an auxiliary monitor so I could have two displays, as well as an auxiliary keyboard. In essence the laptop is just acting as a shell and that's OK. The processor is able to handle Log4OM without a whimper. It served me well throughout the remainder of time on the air this weekend and will be my shack computer until the day comes when I can afford to purchase something newer. I'll have to give this HP a medal when its time finally comes because it has gone above and beyond the call of duty.

I spent most of my time on 10 Meters. The band was alive and it was fun. I also spent some time on 15, 20 and 40 Meters, although not as much. For me, 10 Meters was the happening place to be.  My antennas were the same as usual, my Butternut vertical and my W3EDP.

I'll have to take a good look at the log, but I made somewhere between 80 to 100 QSOs in the course of my effort. I am guesstimating somewhere between 30 - 40 DXCC entities worked. My goal was to demonstrate how easy it is for the budding newbie QRP DXer to get his or her feet wet.  The ARRL DX Contest has a very easy exchange, a very wide audience, and you can get great results without a huge antenna farm.  In four hours, I accomplished a decent amount. If the newbie QRP DXer were to give it "a true effort" I can see how a huge dent can be made in achieving QRP DXCC, if not outright accomplishing it in a single weekend. 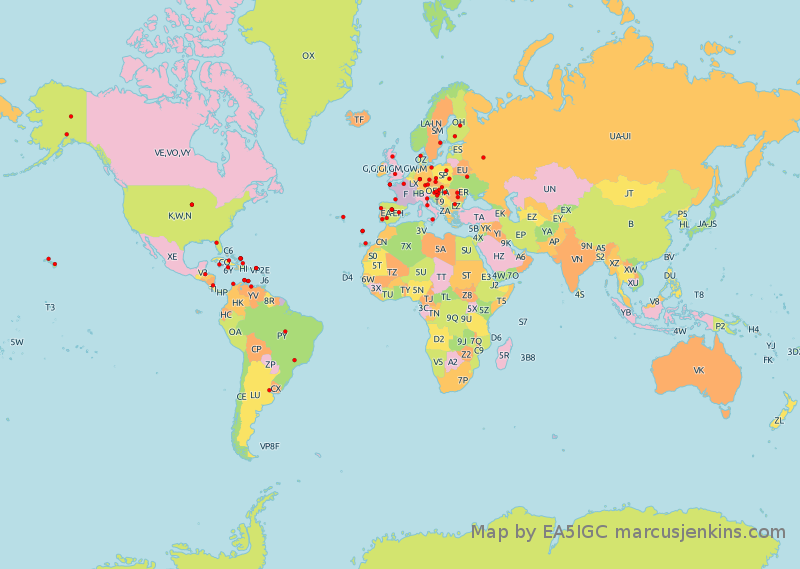 BTW, the two red dots showing up on mainland USA are the home QTHs of two of the Caribbean stations.

One last note - I hadn't realized how much my code speed has improved.  At least I am assuming it has improved. Either that, or the whole world has slowed down. There were far, far fewer stations that I had to outright bypass because I just could not copy them, and also fewer stations that I had to stop and listen to several times before "getting" them.  I found myself bumping up the code speed on the KX3's keyer several times towards the 26 -28 wpm neighborhood in order to send the exchange back in order to match the speed of the station I was trying to work. I guess after 30-some years, this CW thing is finally starting to kick in.