It's hard to believe that it's only four weeks to the beginning of Spring when you wake up and the thermometer informs you that it's only -3F (-19C) outside.  I know for a lot of you, that's probably a heat wave. However, South Plainfield is only 20 miles away, as the crow flies, from that big, warm Atlantic Ocean, and it normally protects us from 0 or -0 temperatures.

When it gets this cold, my basement shack chills down even more. I was comfortable for the 80 Meter QRP Fox hunt last night, but I sure wouldn't have minded racks full of tube gear! It was a treat as we had on duty two of the finest Foxes that we have. John K4BAI and Jim N0UR were handling the Hound pileups like the pros that they are. It was so cool (pun intended) to work both of them rather early, and then to be able to just sit there and listen to their masterful Amateur Radio skills. 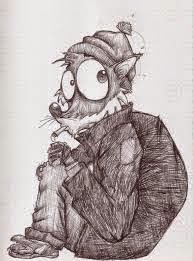 "Hey, Brother, can you spare a Dah?"
Tnx and a hat tip to Randy NC4RT for the caption.

A lot of my QRP friends are jumping feet first into the ARRL DX Contest this weekend, and I suspect they will do quite well.  For instance, Dave N1IX and Dale WC7S recently received certificates from the ARRL, declaring them the top QRP Ops in their respective sections in last year's contest. It's an honor to be able to know and call high quality ops like this, your friends.

Getting back to the seasons, though. Some encouraging signs are that pitchers and catchers reported yesterday for Spring Training, and when I walk out to the car at the end of the work day, it's still light outside. When the sounds of baseball return to fill the air and the days start getting longer, the warmer weather can't be too far behind. Hopefully, in about six to eight weeks, these cold temps will just be a bad memory and some planning for outdoor QRP ops can commence. I am also hoping that sooner than that, the snow will melt enough that I can take down my 88' EDZ antenna for good, and that I will have the opportunity to raise my W3EDP even higher.