I am hoping to get out to the Jeep during lunch hour today, for what feels like the first time in decades. In reality, it's probably for the first time in about two months or so. We seem to finally be out of the pattern of polar vortices, with warmer air making its way back. The high for the day is supposed to be around 57F (14C), so sitting inside the Jeep and operating the radio would not be torture.

Having an hour to get on during the daytime may not fatten my logbook by that much, but it's still better than nothing. And if past practice holds true, then every now and then I should come across something exciting and juicy.

The other good thing is that tomorrow night is the official last class of this Technician License class course that I have been assisting with. Next Tuesday evening is exam night, and after that, I have my Tuesday evenings back to myself. Not that I mind teaching, but it will be nice to be able to get back to the 40 Meter QRP Fox hunts on a normal basis (just in time for the season to end in early April). For the record so far, I am 17 out of 32 in the 40 Meter hunts and 21 out of 32 in the 80 Meter hunts. That puts me smack dab in the middle of the Hound pack, which is to be expected given my antenna situation. Among my circle of closest Hound friends, I am at the bottom of that pack - so much for their good influence rubbing off on me! Heh.

Our team's teaching reputation and success rate must be preceding us, as mention has been made to me of yet another local town wanting a Technician Class held for their CERT members. If that comes to fruition, I will undoubtedly offer my time and whatever meager talents I possess, once again. I'm hoping for a couple month break, though.

It's my humble opinion that if you're going to offer a license class, the best time to do it is either in the Spring or Fall.  Winter comes with too many possibilities for postponements due to inclement weather. Summer brings vacation and family time, so classes really aren't practical then. No, if you're going to offer a class - offer it in either the Spring or Fall - those seem to be the best times.

UPDATE - I got out at lunch time! It was a great feeling. 15 Meters seemed to be hopping with DX. Unfortunately, I was not able to make myself heard.  I tried chasing S01WS on 12 Meters for a while (I have them in the log, but not QRP) and had no joy there, either.

Silver lining?  Even though I didn't make a single contact, my signal was getting out (the couple of time when I called CQ), according to RBN: 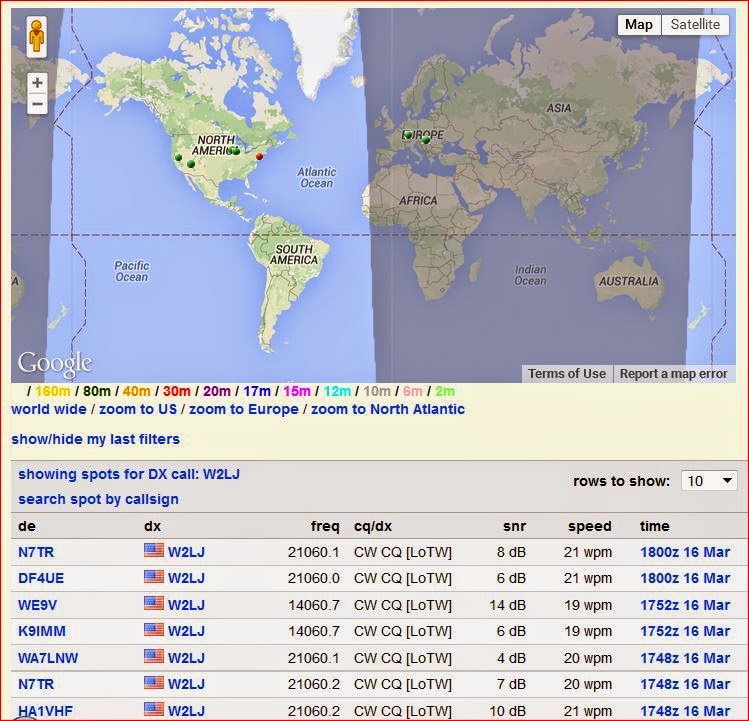 As a QRPer, you know there will be days like this. Some days you can't catch fish no matter how hard you try - other days, you catch the legal limit without even trying.