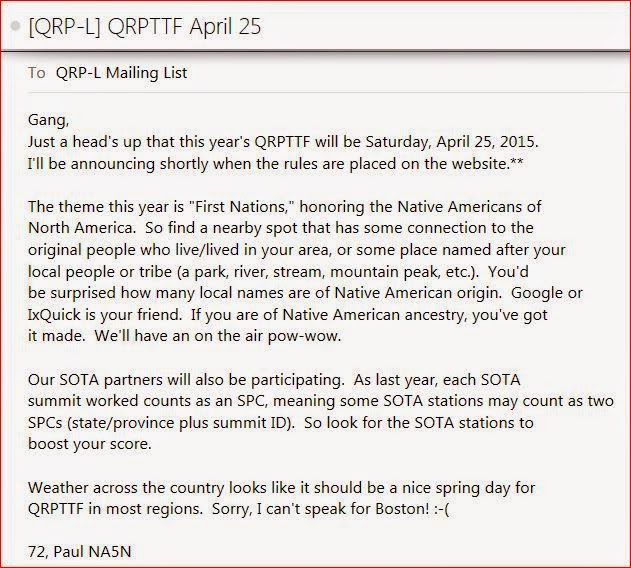 Living in New Jersey makes filling the requirements of this theme a snap!

Right off the bat, I'm thinking that I could go to Johnson Park in either Highland Park or New Brunswick and operate right on the banks of the Raritan River, which according to Wikipedia:

"The river has served an important water transportation route since the Pre-Columbian era. The name Raritan is also applied to the Raritan people, an Algonquian tribe that inhabited Staten Island, near the river's mouth."

Or perhaps I could go over to Piscataway Township and operate from there:

"The name Piscataway may stem from the area's original Native American residents, transplants from near the Piscataqua River defining the coastal border between New Hampshire and Maine, whose name derives from peske (branch) and tegwe (tidal river),[18] or alternatively from pisgeu (meaning "dark night") and awa ("Place of")[19] or from a Lenape language word meaning "Great Deer".

Or, I could even go to one of my favorite spots, Washington Rock State Park, as it is on the first ridge of the Watchung Mountains, which according to Wikipedia (again):

"The original inhabitants of the Watchungs, the Lenape, referred to the mountains as the Wach Unks, or ‘high hills’.[9][10] Evidence of the Lenape presence in the Watchungs can be seen in numerous camps sites that have been uncovered, mainly along the rivers coursing through mountains and in the small caves abundant in the volcanic rock. It is thought the Lenape favored the Watchungs for their profusion of natural resources, including abundant freshwater rivers and streams, a variety of forests, and plentiful fish and game.[11] They also took advantage of the rich soils and maintained many farm areas where they raised a variety of seasonal crops."

So I have plenty of places to choose from. Sometimes the themes that Paul comes up with can be somewhat of a challenge - for example, last year's "Cinco de Mayo" theme. There's not much in New Jersey that has a true Mexican connection.

This year's theme is pretty easy to comply with.