Tired of the same old images?  Want something unique and personal for your very own QSL card?   Something that says "you", and reflects your personality and interests? Are you sponsoring an event and want a well designed and memorable logo?

Have I got the man for you!

That man would be Jeff Murray K1NSS - the man, and Ham behind Dashtoons.

A few years back, I wanted a new QSL card. I've done some self-designed ones before and they always came out well (if I do say so, myself!)........ but at the same time, they came up short of professional looking.  From Facebook, I saw that Jeff also designed QSL cards.  I sent him an e-mail. We corresponded back and forth a few times, and Jeff latched onto my association with the NJQRP Skeeter Hunt and after a few iterations and alterations, came up with this: 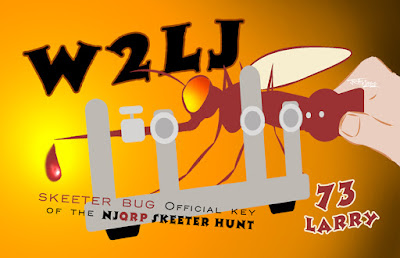 About a year later, I decided that I wanted the NJQRP Skeeter Hunt to have its own special and unique logo.  So back to Jeff I went and his talent and skills came up with this: 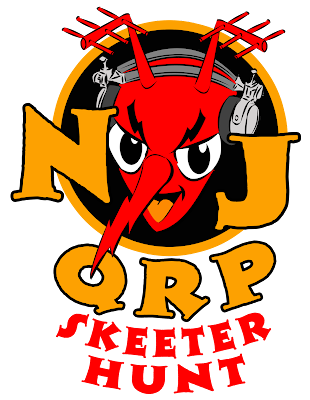 So this year, yet another challenge presented itself.  The South Plainfield Amateur Radio Club needed a QSL card.  What's that old saying about "Going back to the well once too often?" This time "the Well" did not disappoint!  Jeff came up with this superb image, which will be presented to the Club this Wednesday evening for consideration as adoption as our QSL card. 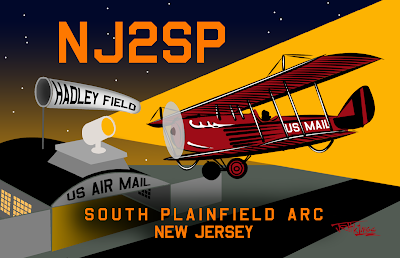 The club members wanted something on the card that is unique to South Plainfield. One of our claims to fame is Hadley Field, which served as the Eastern Terminus for the fledgling USPS Air Mail system back in the 1920s.  Night time flights leaving Hadley Airport got US Mail to Chicago in under eight hours.  Hadley Field remained the terminus until Newark Airport enlarged to become the largest air field in New Jersey. Jeff took our idea, ran with it and came up with pure gold again!

So if you're looking for an image that's unique and well designed, send Jeff an e-mail at k1nss@dashtoons.com.  Jeff is very easy to work with and will keep at it with you until both you and he are totally satisfied.