When I first introduced the "QRP - When you care to send the very least!" car stickers, I received an e-mail from Bill Unger VE3XT asking if I had any problems sending stickers to Canada.  I replied, "Just send a snail mail indicating the number of stickers you want and the funds, and I'll get them right out."

Sure enough, an\bout a week later, an envelope from Bill showed up in my mail box. I put the requested number of stickers in a return envelope and went to the Post Office and used their handy dandy automated postage kiosk to determine the correct return postage to Canada and tossed the envelope down the "Out of Town" mail chute.

A few weeks went by and I got to wondering if Bill did, in fact, receive them. so this time, I sent him an e-mail asking him if he had received them.

I got a reply that he hadn't; but while being a little concerned, I figured that they call it "snail mail" for a reason and I decided to give it a bit more time. I had planned to wait another week to ten days, and t send another inquiry. If Bill still hadn't received them, I would send more.

On Friday, I received an e-mail from Bill.  He got them!  Huzzah!  What I hadn't anticipated was the photo he attached. Oh, they arrived all in one piece and good shape; but I didn't know that there were that many Hams at the United States Postal Service.  They decided to send the stickers to Bill via longpath! 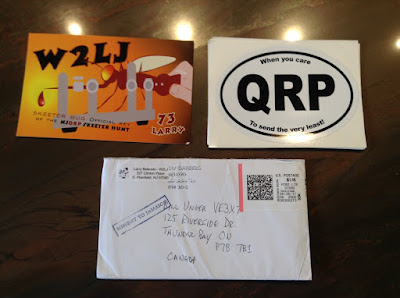 Jamaica ?? Really !!  I know my chicken scratch printing is pretty awful, but even I can make out that  the envelope is addressed to Thunder Bay, Ontario, Canada. I know there's a Montego Bay in Jamaica ..... is there a Thunder Bay there, too? LOL!

The important thing is that they got there, safe sound and in good condition. To any Ham friends that work for the USPS, this is not a knock on you. I'm sure that one of the automated sorting machines probably messed up and if this had been in your capable, human hands the envelope would have sorted properly and would have reached Canada straight off.

Yesterday, the south Plainfield Amateur Radio Club set up a station at the gazebo at Spring Lake Park, the same park where we set up for Field Day.  The intent was to celebrate and participate in JOTA, the Boy scouts Jamboree On The Air.  Harry, KC2PGK is a Scout Master to one of the troops in town and he invited all the Scout Masters and Troop Leaders to bring by as many Boy and Girl Scouts as possible to get a chance to get behind the microphone and get on the air.

The good news is that NJ2SP managed to work station K2BSA, the official club station of the Boy scouts of America from Jamboree 2017 in Glen Jean, West Virginia.  The bad news is that no local Scouts came out to participate.  We were all disappointed; but I reminded everyone that this is a very tough time of year, as school is out, families are on vacations or otherwise have weekend plans. To make matters worse, we really didn't do the absolute best that we could have done with publicity and communications, so the fault is probably partially ours, too.  As a new club, we're still struggling to find our way and get things like this done the right way. The important thing, is that we're trying!