Bad advice from the Internet

In my most humble opinion, the Internet and social media have been a boon to Amateur Radio. Never before has learning and Elmering become so easy and widespread.  There is sooooo much good information out there on antennas, equipment, operating procedures and practises ...... it almost makes me jealous that we didn't have this back when we were Novices in the "dinosaur days".

But there's a down side, too.  Just as there is a lot of good information out there, there's also stuff that makes me go like this when I read it. 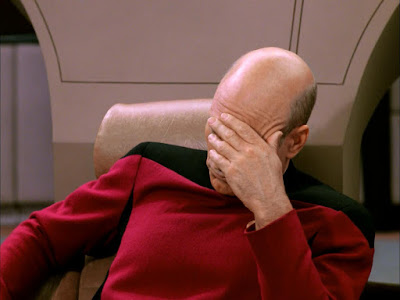 And this happens particularly when it comes to the topic of learning Morse Code. I realize that when it comes to learning, that people are like snowflakes - no two are alike. But I know bad advice when I see it, and there's plenty of it out there.

I think that for the vast majority of people, using gimmicks or visual associations for learning Morse Code characters is a very, very, very bad idea.  I know that the Morse Code is a huge obstacle for some people. Back when I was a teenager of 16 years, I had such tremendous problems learning Morse, that I gave up on it myself for several years. If I had the Internet back then, I probably would have followed some bad advice that would have been offered to make learning Morse Code "easier". Looking back on it, that was exactly my problem, even without having the Internet.  A well meaning person gave me a Morse Code chart - all the letters of the alphabet, and the numbers printed out, alongside their Morse equivalents. It became a crutch.  My brain just couldn't make the audio to visual to brain connection quickly enough; and I gave up.  It was only about 5 years (5 years! 5 wasted years!) later that an instructor gave me the ARRL Morse Code cassette set with the admonition to LISTEN, that I was able to learn the Code successfully.

In the end, using visual associations such as charts or tables, counting dits and dahs, or any kind of mental associations (D = Dog did it)  or other quickie learning gimmick actually slows you down in the long run. Sure, it may have helped one to get to the minimum 5 WPM level quickly, but after that, these methods hang around your neck like the proverbial albatross.  Because once you get to the 10 WPM level, you will reach a plateau - and until you unlearn those bad habits, you won't advance any further. Maybe the best analogy is that the Morse Code characters have to become as automatic to you as hitting the brake pedal on your car when you see the brake lights on the car in front of you come on. You don't think about it, you just do it!

As I eventually learned, the best method to learning the Morse Code is by listening. Not looking ....... listening.  I think the best method is to combine both the Koch and Farnsworth methods.  The Farnsworth method would have the student listen to Morse Code characters sent at a speed of about 13 WPM, but spaced out at a speed of about 5 - 8 WPM.  Using the Koch method in combination with this would be to introduce the similar characters in bunches, at the same time, i.e., first learn, e, i, s, h, 5 first and get comfortable with those before moving on.

But above all, it is important to imprint the sounds in your brain. Anything which can come in between the ear and brain is going to make things much harder once you've reached the point where you've learned the characters and you're training to increase your speed.

In another post, I'll go into some of the resources available for learning Morse.  I haven't looked into these in a while, and I'm certain some good stuff has become available since I last looked.