From the mail bag

I received a couple of e-mails asking me to post some information - perhaps opinion, would be a better term. In the first, I was asked if I would list, in one spot, the materials that I used to build my magloop - here goes: 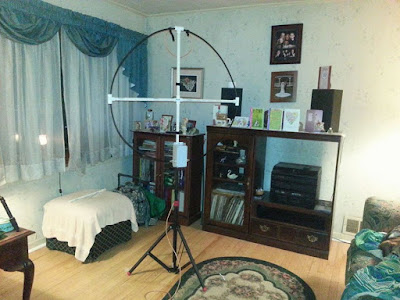 The feeder loop was made from spare #14 wire and the feedline was taken from spare RG-8X coax that I had that was just sitting around. The PVC support pieces were purchased from Home Depot - 1/2" schedule 40 PVC. In addition to the tubing (18" sections), I used one 4-way cross piece and three PVC Tees. The total cost for all materials came to less than $125, including the stand.

Nothing against the commercial magloops that are out there that are available for Amateur Radio use. They're all top notch pieces of equipment; and you wouldn't go wrong purchasing any of them. However, there's just something ultimately satisfying about rolling your own and ending up with a specimen that works, really well.

The second e-mail asked for a recommendation for keys for those who are just beginning to use Morse Code.

For the neophyte, I would recommend a straight key to start off.  This will allow you to send Morse at a speed which is most comfortable for a beginner - slow. My favorite straight key, up until recently, have been the Nye Viking Speed-X keys. 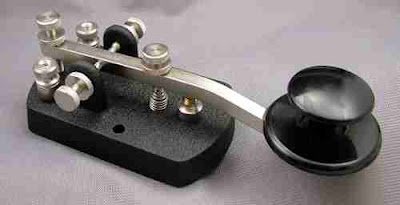 They are fully and easily adjustable and the large Navy style knob makes finger placement easy and comfortable.  Using a straight key from the beginning will allow you to concentrate on proper spacing and rhythm of Morse characters. It's harder to let the Code "run away" from you when you're using a straight key as compared to sending with a keyer and paddles, which can be set for a higher speed than a newbie should be using.

Some new Hams dive right into electronic keying, thinking that the almost perfect machine keying will mask their "newness". Actually, I've heard some pretty horrendous CW out there from people using keyers and paddles incorrectly. Yes, the dits and dahs are perfect, but the spacing between characters and words can go all over creation, making copy difficult, if not impossible. IMHO, starting out on a straight key goes a long ways towards teaching proper spacing and weight of the Code.  Once you've mastered that, you can move on to paddles and keyers with confidence in your abilities.

If you want to advance past a straight key; but the thought of electronic Morse Code somehow turns your stomach, there are always bugs and Cootie keys that you can advance to.  A bug, of course, is a semi-automatic key, which allows for the automatic generation of dits and the manual generation of dahs.

Using a bug can be difficult, as they are really meant for code speeds of about 25 WPM or higher. They can be slowed down using various methods, but even so, using a bug is not for the faint of heart. Getting the rhythm and spacing to sound good take practice - a LOT of practice!

Sideswipers or Cootie keys are kind of like a sideways straight key.  These also take a lot of practice to get used to; but not as much as a bug.  The problem with a Cootie or sideswiper is that once you get used to using paddles and a keyer, it's hard to transition back to totally manufactured dits and dahs.  It takes time to get used to the fact that you just don't hold the lever to one side or the other to have a string of dits and dahs come out!

No matter what method you use to send Morse Code, be aware that it will take time and practice to become really proficient.  There are many out there who can switch from a straight key, to a bug, to a Cootie and then to a paddle and keyer and sound fantastic on all of them. If you come across someone like that, you've come across a true Master of the art of Morse Code.  It takes a very log time to get that good!

Finally, whatever way you choose to generate code, buy the best key that you can reasonably afford. Your straight key, bug, paddle or sideswiper will become your vehicle towards sending good Morse Code.  Using a quality tool will go a long way towards adding to your enjoyment of CW.  As a comparison, yes ..... you can drive from New Jersey to California in a beat up ol' jalopy; but the journey is much more pleasurable when you're travelling in a fine luxury automobile.