Back from the Lake

As I type this, massive depression is setting in as the last few hours of my vacation week are coming to a close. Tomorrow, it's back to the Old Grind.

Last week was spent at our customary place at Lake George, NY.  The weather was iffy, with rain and thunderstorms at the beginning and end of the week. Sandwiched in the middle was some good weather.  I didn't head out for my customary QRP session at the top of Mount Prospect until Monday, this time. Usually, I head out there on Sunday and take part in the QRP-ARCI Homebrew Sprint, but this year I was content to spend Sunday doing my best imitation of a couch potato.

When I went up there on Monday, I brought the magloop along and set that up.  Immediately, I knew something was wrong.  I was having a very hard time getting a loud background noise "sweet spot", which indicates a good match.  Removing the top of the capacitor enclosure, it became obvious that if I turned the tuning knob in one direction, all was well. When I tried to tune in the opposite direction, the capacitor shaft would not turn at all.  Argh!  One of the two set screws on the reduction drive had come loose! 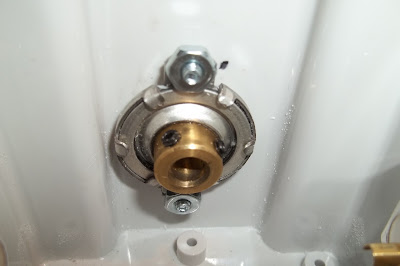 And of course, of all the tools that I carry in the Jeep, a complete set of hex wrenches is not included. I put the magloop away in its carrying sack and broke out the Jackite pole, my drive on mast support and the PAR 10/20/40.  I had that up and on the air in a few minutes, but the bands seemed dead. I had no luck calling CQ and I wasn't heard on 17 Meters by J68GD, who was loud, but called CQ in my face when I tried to answer him.  Obviously, this was another instance when propagation wasn't reciprocal.  I went back to 20 Meters and was hunting around when all of a sudden it got very windy. My ARRL mini log books were flying all over the place and the Jackite was doing its best impression of a Hawaiian Hula dancer. I decided to call it quits for the day, and head back to the cabin.  On the way back, I stopped by a small hardware store in Lake George Village and picked up a good hex wrench set.  When I got back to the cabin, once again I removed the top of the capacitor enclosure. The one set screw was tight and was right as rain, but the other needed about a 1/4 turn to get it snug. I gave it an extra bit of torque to make sure it was tight, but not to the point of rounding off the set screw.  Right away, I was able to turn the tuning knob in both directions and see that the capacitor shaft was moving, also. Lesson learned - always have the proper tools close by!

Although I didn't make any contacts, later that night I logged onto the Reverse Beacon Network website and plugged in my call sign to see if I was being heard.  I was!  Good signal to noise reports all up and down the East coast, into the Mid-west and even out as far as Saskatchewan, Canada. I was getting out, I just wasn't getting any takers.

The end of the week turned rainy, damp and chilly.  Thursday afternoon was spent largely in the cabin. Once again I decided to set the loop up in the cabin.  I wasn't hearing all that much, except on 20 Meters, where I was hearing some DX. US1GCU was calling CQ, so I gave Leo a call and got an answer.  To the 599 that I gave him, I got a 579 in return.  A few minutes later, I heard a loud UR4EZ calling CQ.  Sent my call again and was answered immediately. Victor gave me a 579 and I gave him a 599.  Both Ukrainians were very loud.  I was very pleased to receive the 579 reports as I never mentioned to either Leo or Vic that I was running QRP power and that I was using a magloop antenna indoors. And since the unsolicited 579s were received instead of "compulsory" DX 599s, I will take it that I was given RSTs that were honest and somewhat accurate.

Again, this magloop continues to amaze me.  It boggles my mind from time to time that it gets out so well and that I receive the signal reports that I get. Again, this is not an every day antenna; but it sure makes a nice antenna for vacation and portable ops when there are no trees around; or you don't want to mess around with trees on someone else's property.

This morning was the Sussex County Amateur Radio Club's annual Hamfest at the Sussex County Fairgrounds in Augusta, NJ.  I think that without a doubt, this is the largest Hamfest in New Jersey. Luckily, I was able to attend as some years it occurs on the Sunday that we are in Lake George.  I made the trip up to Augusta with Marv K2VHW.  I didn't have plans to buy much of anything. I did come home with some CR2023 button batteries for Harold's LED collar that we use when we take him for walks after it gets dark.  I also came home with a little Radio Shack travel alarm clock that I picked up for $2.  I set it to UTC and put it in my backpack.  It will serve well as my official portable ops logging clock. It is only about 2 X 3 inches and maybe 3/4 of an inch deep, so while it is very small, the display takes up a large part of the front and is easy to read.  There's even a button that you can push to light up the display for reading it in darker conditions.

There were lots of things on tables that I was absolutely salivating over, especially this Brown Brothers straight key / paddle combo. 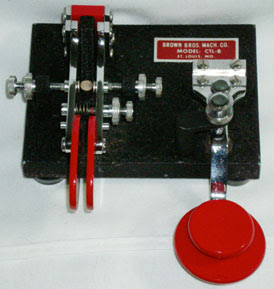 The gentleman selling it was firm on the price and was more than I was willing to spend. And when it comes right down to it, while I always wanted one of these, I have so many wonderful paddles and straight keys already - how many can you have? And what good would it do to have it just to collect dust on a shelf.  I can't imagine using this primarily instead of my Begali or N2DAN Mercury paddles.  Collecting is nice if you have money to burn, but that's never been the case for me.

Besides, I will be adding one more key to my collection at the end of the month - a W2WK Marconi Straight Key.  I'd rather have one of Bill's straight keys than the Brown Brothers combo, any day.