This lil' guy caught my eye a few months ago, a single lever paddle for the KX3. 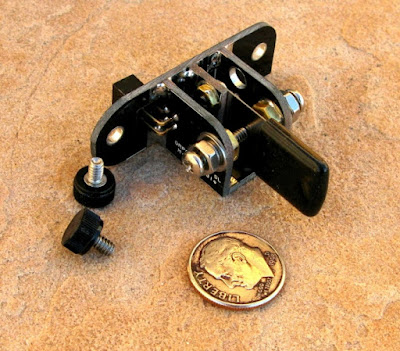 I went over to the QRP Guys website, only to see that it was priced at $25. I figured, A) I love single lever paddles and B) "How can you go wrong for 25 bucks?", it's not like it's going to break the bank, and I ordered one.  It came quickly, but today was the first time since it was delivered that I got a chance to sit down and build it. The instruction manual, which you download and print out, gives this kit a difficulty rating of "4" on a scale from 1 to 5, where 1 is "Simple" and 5 is "SMT". To be honest with you, I didn't find it difficult at all, except for one small glitch.

The paddle body itself is made from PC Board material. There are five main pieces - the paddle base, the paddle leaf holder, the left and right contact holders and a support.  All fit together nicely and are tack soldered together to form the paddle body. once you have everything aligned, you re-solder the tacks to make them permanent.

The only problem that I had (with the exception of losing a screw, which went into orbit. It's a good thing I had a serviceable replacement in the junkbox!) was that the paddle support would not fit flush with the paddle base. There's a slot cut for it, but it wouldn't fit.  I had to take out my jeweler's files to make the notch just a tad wider. 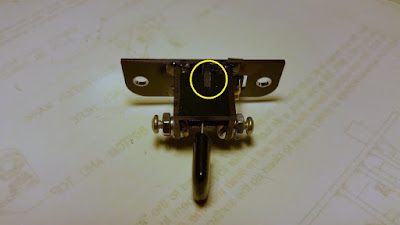 The entire process from start to finish took less than two hours and that's with my "check-everything-three-times-before-soldering" paranoia. Again, I did notice that things went easier for me when I took off my glasses and got up close and personal to the work that had to be done. The ol' peepers really aren't what they used to be. 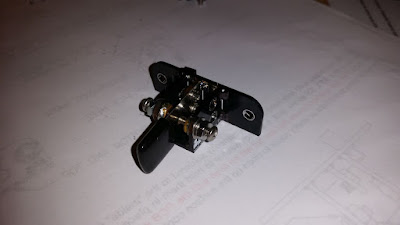 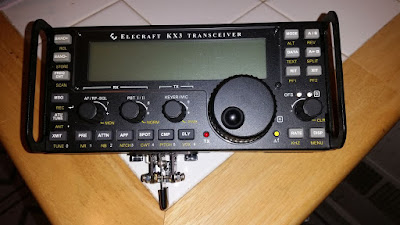 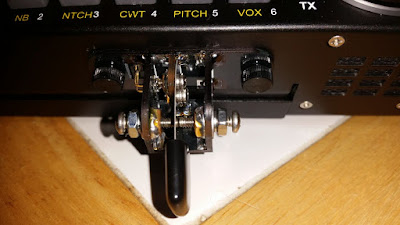 Adjusting the contact spacing was a piece of cake and it was easy to get things just where I like them - almost at touch paddle setting. The manual says that spacing as close as a couple thousandths of an inch is possible and I believe it. I barely have to move the lever in either direction to produce clean, crisp code.

The only thing that I might consider is taking up the manual's suggestion to get a cheap set of feeler gauges to use as stock for a new lever. The one supplied is a little "whippy" in my estimation. A thicker piece of metal would feel more robust. The lever supplied is certainly usable as is; but a stiffer one would just be improving the feel a tiny bit closer to my subjective preferences.  You know how fussy and particular we CW ops get about our keys!

The final step that I took (stupidly, AFTER taking the photos!) was to take a permanent black magic marker, and go over the edges of the circuit board material and to cover over the solder fillets. That made the who assembly look a bit more "finished". A nice touch is that if you own a set of the SideKX side panels and Lexan cover, there are no issues with placing the Lexan cover on your KX3 while the paddle remains attached. It does not get in the way of the cover, whatsoever. Additional bonus - you can still use your favorite paddle(s) while this remains plugged in.  You do not have to remove it in order to use your favorite external paddle.

If you want to have an attachable paddle for your KX3 or KX2, but feel squeamish about parting with the dinero for a set of Elecraft KX3PD or KX2PD attachable iambic paddles, then you might want to look into buying one of these. I think I'm going to enjoy using mine - I do so far!