I am lucky in the fact that I know a lot of QRP Hams that I consider to be good friends who live throughout the country. I have an especially good friend or two in Erie, PA. I have been blessed to know Bob W3BBO for a good number of years now, since he temporarily lived in New Jersey for a few years back in the 90s. Through Bob, I have come to know his friend Neal W3CUV. Bob and Neal were licensed around the same time and they've been friends throughout the years. Neal has become interested in QRP and home brewing.

These guys do excellent work! Bob was over Neal's house a few weeks ago to go see the new SWL-40 that Neal had recently built. I know that he did a fantastic job as Bob has sent me photos of some of Neal's projects. Let's put it this way ..... if any of you ever have the fortune to ever own a piece of gear that either Bob or Neal have built, you are GUARANTEED to own something that was put together the right way and will stand the test of time.

Their "mini-QRP forum" as Bob called it, inspired him to purchase a Wilderness SST. 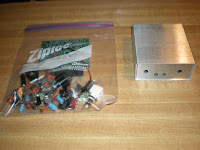 This is the bag of parts that arrived at W3BBO's house. Needless to say, after a few hours in Bob's more than capable hands, the bag o' parts in the above photo was transformed into the working specimen that appears in the next photo. 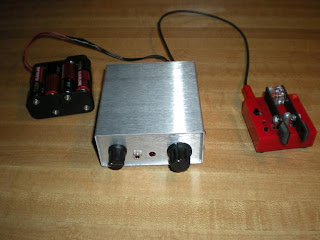 So that in turn, inspired me! I ran down the basement and hopped on the air for about an hour this afternoon. Kind of hard to do when your wife is working; and you're home alone with your 6 and 7 year old kids - but not impossible! I turned on the K2 and was pleased to find that 15 Meters was open (funny how "dead" bands are always open during a major contest!). In about an hour, I was able to work the following (with 5 Watts) 6Y1, TI5, V49, KP2, EE7, PT7, EA8 and V31.

But getting back to Neal and Bob; they are two very active and avid Hams. Bob and Neal are planning a few portable QRP operations this summer (day trips and such) from various places in and around the greater Erie, PA vicinity. Whenever I hear their plans for this coming season, I'll post them here. Listen for these two guys; and work them if you can ..... you'll have worked two of the best!