Fun afternoon on the radio

The weather this afternoon turned out to be as dismal as promised - maybe even more dismal than promised!  The kids and I went grocery shopping late this morning.  When we went into the store it was drizzling - when we got out of the store it was drizzling. When it was time to transfer the grocery bags from the car to the house it started raining in earnest and was just plain miserable.  It was a day where you could feel the cold and wet all the way, deep down into your bones.

The cruddy weather notwithstanding, I did manage to put some time in on the air this afternoon.  In honor of it being FYBO day, I decided to forgo the K2, and instead broke out the PFR-3A. 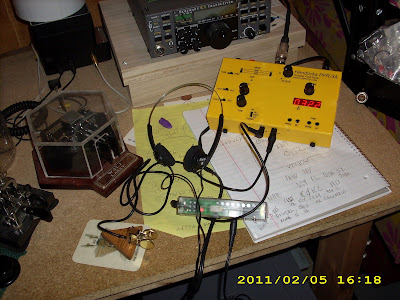 My "Summer Station" was on the air.  I was using my Bulldog clip paddles, and headphones along with a Booster-oo audio amplifier (which these old ears find most helpful).  I didn't use the AA0ZZ keyer, I just manually called "CQ FYBO" instead.  The power source was a 12V SLA battery which had been charged via a solar panel.  If I end up sending in my score, at least I can qualify for the "alternate power source" bonus.

In all, I made seven FYBO QSOs and had a couple of nice random ragchews in between.  The contact I envied the most was Bob N4BP who was giving out 82F (28C)  as his FYBO temperature part of the exchange.  It was 58F (14C) in my basement!  I know I was confusing people as one or two expected a NJ temperature in the 30s.  So when I was asked for the temperature a second time, I would send "58F INDOORS".

All in all, it was a great way to spend a dank, gray, miserably wet February winter afternoon.  Maybe next year it will be sunny and dry and I can operate from the back yard!