Today is Thomas Edison's 164th birthday, as commemorated by Google:

I am very fortunate to live only a few miles away from the site where Edison perfected the electric light in Menlo Park.  Menlo Park is not a town unto itself.  At the time, it was just a part of a larger town which was known as Raritan, NJ - named after the largest river in our area.  Raritan was renamed "Edison" after the inventor's death and now Menlo Park is just a neighborhood of Edison, NJ.

There is a memorial tower and a tiny museum there. The actual buildings which made up TAE's Menlo Park laboratory were moved down to Florida after his death by his good friend Henry Ford.  The National Park Service maintains the Edison Laboratories in West Orange, NJ as a National Historical Landmark.  I have been there a few times and it's a very interesting place to visit. It was there that Edison perfected the phonograph and did his early pioneering work in movie making.  His movable stage is located there and you can see it still today.  The stage was on a circular or oval track which allowed it to be moved so that it was always in the direct sun for best lighting.  Some of Edison's original batch of electric lamps still burn there.  They have been refilled with inert gas and are run on DC so as to make them last. 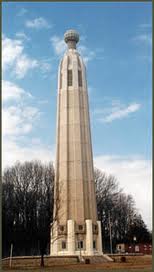 The memorial tower at Menlo Park is currently closed to the public as it has fallen into disrepair.  The good news is that private funds have been raised and a refurbishment project is underway.  It should be reopened in a few years for public viewing and the tiny museum is also going to be renovated and made substantially larger.

Back in the mid 90's the Piscataway Amateur Radio Club held a special event station right on the tower grounds.  It was super cool to visit the museum when it was open.  There was a visitor guest book there and it was fantastic to see the signatures and addresses of all the folks from foreign countries who came to see the spot where the electric lamp was perfected.  Almost as cool as looking through QSL cards!

For as many inventions and patents as Thomas Alva Edison is famous for, we don't normally think of him as associated with Amateur Radio.  But in a way, he indirectly was ......

"Thomas Edison in 1883 noticed that electrical current flowing through a light bulb's filament could make the wire so hot that electrons boiled off, sailing through the vacuum inside the light bulb to a metal plate that had positive charge. Because Edison didn't see any way the phenomenon would help him perfect the light bulb, all he did was to make a notation of the effect, which he named as the Edison Effect. The Edison effect remained on the shelf until 1904, when a former employee; inventor John Flemming went to work for Marconi Radio Company! John Flemming first assignment was to find a better way to receive radio signals. Flemming began experimenting with the Edison effect. He discovered that radio waves passing through an airless tube created a varying direct current, which could be used with headphones to reproduced the sound carried by the waves."  From that point, the vacuum tube was developed, which was the building block of all radios until the invention of the transistor (also developed in New Jersey, by the way).

On a personal Ham Radio note - more progress has been made with Ham Radio Deluxe.  I finally figured out how to rename the Custom Fields; and it was just as easy as everyone stated.  The only thing is that I didn't realize that you had to have the very latest version to be able to do that!  I had been using version 2494.  Tonight, I downloaded and installed version 2837 and that little problem was taken care of.