Getting old is a bummer

Not that 53 is that old.  But again, I embarrassed myself and I prefer to blame it on the onset of old age rather that my own silliness and stupidity.

I went to the Ham Radio Deluxe website the other day and was looking at the various versions of Ham Radio Deluxe 5.0.  I had version 2837 installed.  Looking quite hastily, I saw February 24th and downloaded the software thinking it was version 2949. 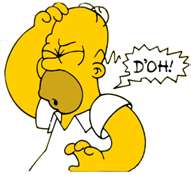 Then to make matters worse, I went on the Yahoo Groups HRD message board and asked why I lost the ability to configure the names of the Custom Fields.  Hello!!!!  Perhaps it's because you're using a software version that's over a year old?  Talk about feeling mortified.  I feel like I should send my A-1 Operators Club certificate back to the League!

There are days when perhaps it's better to not get out of bed.

On the bright side, I did manage to work Drew K9CW as K6JSS/9 in Illinois tonight. Drew was 589 into NJ and I got a 579 back on the G5RV.  That's the best RST I've gotten using the G5 in quite a while.  Pretty good for a guy who can't seem to walk and chew gum at the same time (that would be me).

As far as the replacement antenna goes, I located my window line and wire for the legs, as well as the 4:1 balun while I was looking for the Vibroplex weights.  All I need is the Ladder-Grabber and some free time on an upcoming weekend (and some nice weather wouldn't hurt, either).