So was that you that I worked so many years ago?

For whatever reason, the bands were super noisy for me today.  After doing some heavy duty yard work (I ripped out about eight dead shrubs from in front of the house that didn't survive this past harsh winter on top of last year's scorching summer), I decided to sit my butt down in front of the radio for a little relaxation.  It was not to be, really.  All the bands were filled with loud hashy noise, except for 80 Meters of all places!

I was listening around 3.560 MHz, the QRP watering hole, when I heard a fairly weak station calling CQ - K4JYS.  I answered him and we made contact. 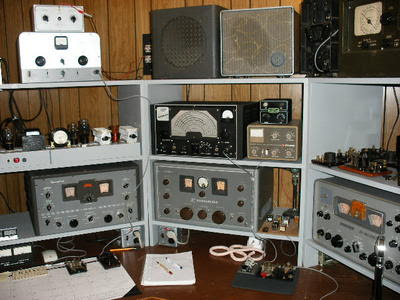 Station K4JYS, courtesy of K4JYS and QRZ.com
As you can see, Bill is into using older equipment.  His signal was only 449 and there was lots of QSB.  I can say with confidence that he told me he was using a Hammerlund receiver; but am not quite sure what he was using for a transmitter.  Since band conditions were not the best, we kept it short and bade each other best wishes and called it a QSO.
"So, what's the point of this blog post, W2LJ?  Are you just going to bore me with details about a short QSO?  Or are you going to whine about band conditions?"  Neither, gentle reader, neither ....... read on.
I popped K4JYS into Ham Radio Deluxe only to find that I had worked that station twice before.  Once in 1994 during the ARRL's Hiram Percy Maxim Memorial contest event that the League had run that year; and also in 1995 in the RTTY Round-Up.  Back in the old days, when I used to be QRO - 100 Watts for the 1994 QSO and 125 Watts for the RTTY QSO.
But ultimately, this begs the question ..... was this K4JYS the same person that I worked back in 1994 and 1995?  I have gotten several e-mails in the past from folks who have looked at my log on QRZ.com and have written me to say, "There's an error in your log. You say you worked me on such and such a date; and I wasn't even licensed then!" To which I can usually reply, "No, that's not an error.  I worked the person who was the original holder of your call".
We tend to forget that those of us who have vanity calls (myself included) are many, many times not the original holder of said call.  Just because I didn't work YOU, doesn't mean that I did not work the callsign which you now hold.
Having that experience in the past, this leads me to wonder about this when I work someone that the log tells me that I worked 10, 15, or 20 years ago.  Fortunately, there's a place where you can go to check things out for yourself.  N4MC's Vanity HQ  Pop in the callsign in question and you can see for yourself.  When I popped in K4JYS's call, I found out that yes indeed, this was the very same Bill that I worked sixteen and seventeen years ago.
Plug in my callsign and you will see that if you worked W2LJ prior to 1999, it wasn't me, it was Ed Swoffer, the original W2LJ.  It's a neat tool to have at your fingertips if you have a computer in the shack.  There's a lot of guys who are "purists" and are dead set against computers in the shack.  There are also guys, whose computers do everything for them from pointing the antenna, to generating the CW, to making coffee for late night contesting sessions.  I fall in the middle - my computer is there for logging, looking up QTHs on Google Earth and for neat little Web sites like QRPSPOTS and N4MC's Vanity HQ.
72 de Larry W2LJ
QRP - When you care to send the very least!
Posted by Larry W2LJ at 7:43 PM