Not sure I like it; or will keep it, but it IS different from what I had.  Is this template easier on the eyes?  Some folks recently and privately commented to me that they didn't like a white typeface against a dark background.  Is this any better?

I joined my CERT group to aid South Plainfield with the running of the Holy Savior Academy 5K walk/run this morning. Luckily, I only had one obnoxious driver to deal with who couldn't understand that the main roads were closed so that people wouldn't be run over.  "You actually expect me to park on this side street and walk a block to my house?", I was asked.  "Yes, sir", I replied, "It's for your protection as well as theirs."  He still huffed and puffed until he started getting unreasonable and a little belligerent, so at that point, I radioed for police assistance.  They arrived and suddenly the light bulb went on over his noggin - he got the idea.

The thing that gets me is that not only is this an annual event; but it's also very well publicized.  Notice about it appears on the local cable channel. Sacred Heart Church, which loans out its parking lot for the epicenter of the event is by far the largest church in town.  The notices for the "Family 5K Run/Walk" appears in their bulletin for weeks ahead of time. The local town paper published the details about the run/walk and the road closures the week before the event, also.  The town puts it on their Website and their Facebook page. Don't people read?  Several of our CERT members suggested to our Director of Emergency Management that perhaps next year, on the night before the event, that we do an automated "reverse 911" call and telephone all the houses anywhere near the route that the roads will be closed. Oh, and by the way, the roads are closed for all of about an hour - 90 minutes tops!

One of my Ham buddies, Marv K2VHW, who also lives in South Plainfield was at the event with me.  He told me that his rain gauge had close to 4.5 inches (11 cm) of rain in it due to yesterday's visit from Tropical Storm Andrea.  Yesterday was definitely a soaker, and I'm willing to bet the cicadas weren't too thrilled with it.   I know that the tropical storm season does officially start  with the end of May.  I don't recall us ever getting a visit by a named storm so early in the season.  I hope it's not a portent for things to come.  Irene in 2011 and Sandy in 2012 were enough for me for a long, long time. 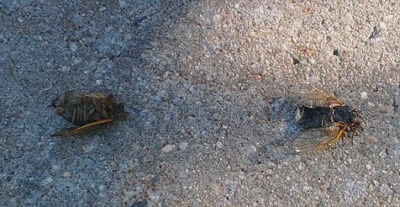 Last night was a relatively quiet night on the radio.  I did turn up the power to work a new DXCC entity, however.  I heard TA3XA, Met fielding callsigns on the very low end of 20 Meters.  The pile up was pretty fierce and Met must have been running barefoot as he was only about 579 here.  To make matters worse, he was running simplex, so it was a huge jumble.  This is maybe the third time in my Ham career that I've ever heard Turkey on the air, so I just wanted to get him in the log.  He would call "QRZ?" and the veritable dam-burst of callsigns would entail.  I waited until the deluge waned and then tapped my call out.  Eventually, my strategy paid off and a 2X 579 shorty DX QSO occurred.  Another one in the books!

Tonight, there's a church carnival going on in town.  My CERT team will be out again, but I have to drop my kids off at a school dance and then pick them up, so I don't think I'll be available for parking duty.  It's going to be a mess too, because I drove by the field where they direct cars for fair parking and it looks like a huge mud wallow after yesterday.  Maybe I can use the time between dropping my kids off and picking them up for some HF time.