Today I pulled off a hat trick during my lunchtime QRP session. A triple play, a trifecta, a triple crown ..... three QSOs, one each on three different bands, in about 15 minutes. One on 20 Meters, one on 17 Meters, one on 15 Meters. A lot of band hopping!

The first QSO was a domestic one, but was perhaps the contact that intrigued me the most of the three. On 20 Meters, I worked Mike AI8Z/8, who was on SOTA Summit W8M/UP-057. This is better known as Feldtmann Ridge on Isle Royale National Park. The park is technically part of Michigan's Upper Peninsula,  but is actually an island in Lake Superior, very close to the Canadian shore. I did a Google search for images and have come away seeing that this is one very beautiful location. 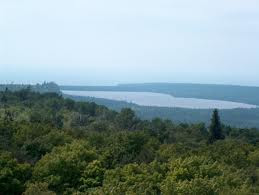 Looks like a perfect place for a QRP vacation. This is exactly the kind of QRP adventure that I dream of and salivate over. Some day, I'm going to go on one of these! I wonder if Ken WA8REI has ever been there?

The next QSO happened on 15 Meters, which seemed to be open with a few signals today. I answered HC2SL, Alfredo's CQ from down in Guayaquil, Ecuador and received the standard DX "TU 599" exchange. He did get me first time, no fills; but I'm pretty darn sure I wasn't really 599. Alfredo really was 599 up here in New Jersey, however. His signal was really booming in.

From there, it was a jump on over to 17 Meters, where I answered another CQ. This one was coming from Andy DM5MU, from Leipzig, Germany.  Andy came back to me on my first call, also. Andy rewarded me with a 539 report, while I was able to send a 579 his way. The DX does not have to be 599+ in order to get a QSO. If you hear a DX station calling CQ, and they're not making your eardrums bleed, don't be afraid to throw your call sign out there, anyway. They might not hear you; but then again, they might. You're never going to get a feel of who you can work and who you can't if you only answer the loudest of the loud. Push the envelope - you will be rewarded many times over.

I would have liked to have stayed on longer, but after working Andy, I felt a buzz from my cell phone. A text message indicating that I had to cut lunch short and go back inside to handle a mini-crisis. Oh well ..... how do these crises seem to know when the bands are hopping?

On a "blog housecleaning" note, I have added one blog to the blogroll and have eliminated another.  First off, welcome to Jim Smallwood N7RCS and his blog, "Low-power, low-profile QRP from the Pacific Northwest!"  Looks like it's going to be a good one.

Secondly, at the request of the blog owner, I have deleted the link to Smoke Curls by Jeff Davis KE9V. Jeff wrote me to let me know that he sold all his Amateur Radio gear and has retired from the hobby.  'Tis a pity, I will miss his word smithing - he is one very talented person.