When I go out for these lunchtime QRP sessions, I never know what I am going to get. Sometimes the bands are smoking, and I'll work maybe three or four DX stations in my limited amount of time. Sometimes, it works out that I just work one station during my lunch break. That was the case today. Fortunately, it's been very rare that I get shut out.

Today's QSO was a very pleasant 20 minute rag chew with Gene N5GW. Gene and I have worked each other countless times, but to be honest with you, the majority of our conversations have sounded something like this:

But as I stated before, today we had an actual conversation - no QRP Sprint exchange .... for a change!

And this time, Gene was not in Mississippi, he was in Tennessee, on vacation on the Cumberland Plateau.  Gene and his XYL are enjoying the mountains, and having a gold old time. Gene brought along his IC-7000 and strung up a wire antenna in an oak tree outside their cabin. Gene had a good 589 signal into New Jersey, and I got a 559/569 report in return. 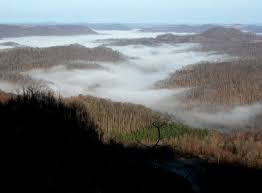 Gene had the good fortune of having a good antenna (even though it's temporary), and high elevation. That combination gave him a winning signal.

It's always a delight to actually converse with guys that I've only held brief QSOs with. QRP is not just contesting and sprints. It's also very much getting to know the other guy, just like in the other niches of Amateur Radio. And this is the better part, because this is where the lasting friendships are made.