One day, I was thinking about how much I like to read about my fellow Amateur Radio operators.  I love it when they tell stories about how they became Hams and how they first learned about Amateur Radio, what they're doing now, and what their other interests are. It simply fascinates me.

I decided to develop a series of blog posts titled "Profiles in QRP".  A series of questions will be posed to those who have shown interest and dedication to the QRP game.  In the coming months, some of the profiles published will be of QRPers you are probably very familiar with - some maybe not so.  The idea is to ask these questions across an entire cross section of QRPers - portable operators, contesters, rag chewers, tinkerers, inventors, entrepreneurs, (maybe even bloggers!), etc.

I had intended to kick this series off last month, but I was delayed in doing so.  My intention is to run one profile a month. For August, I will run two profiles - one at the beginning of the month and one at the end.

The first profile is of Ken Louks WA8REI.  If you're on the air at all, you've probably run into Ken numerous times.  He is active in a lot of the QRP Sprints and is always to be found, ready and eager for a rag chew. Ken is also very active in the Polar Bears QRP group - a bunch of QRPers dedicated to portable outdoor ops away from the conventional shack.  There he is most affectionately known as Blackjack Bear. It's always a great pleasure to run into Ken, whether it be a short sprint QSO or a longer one where you can gnaw on a piece of "sammin" with him. 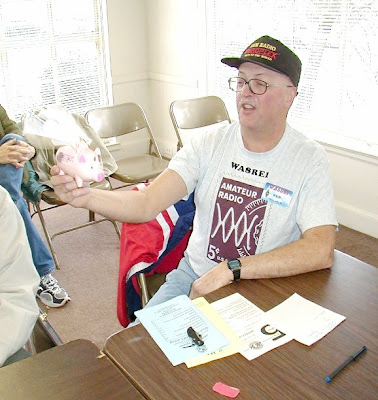 1) How did you first become interested in Amateur Radio?

My first exposure to Amateur Radio was through my Uncle Ed Wissmiller, formerly 8CEH, who resided in Saginaw, Michigan.  He helped me learn the code when I was 12 years old. He had let his ticket expire years before I was born, but he was quite the guy! He was a WW I pilot, and later, a stunt pilot and a wing walker.  In fact, he invented the remote water meter reader, so he had quite the technical bent. He was a printer by trade, and had several printing presses in his basement.

Also, my dad had given me a Heathkit CR-1 Crystal Receiver when I was 10 years old, in 1957. I still have it, and it works like new! My dad always encouraged me to learn about many things. I sent and received Morse Code via light to and from another neighborhood kid. I was also inspired by several other Hams who all lived within 2 or 3 miles from me - "bicycle range".  I was both a Cub Scout and a Boy Scout.

Since June, 1965. My Novice station was a Knightkit T-150 transmitter and a Heathkit HR-10 receiver, both of which I built as new kits.

I had a Heath HW-100 Transceiver, which I always tuned up at minimum power.  One day, I forgot to increase my power after tuning up, and following a long, solid QSO, calculated that my output power was 4 Watts. I'd operate QRP a few times a year in the '90's. Always liking a challenge, I became a serious QRP Op in about 2000. 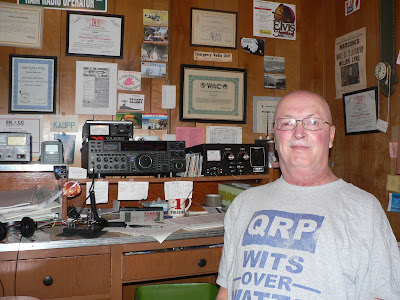 4) Who has been your biggest QRP influence?

Nobody in particular! I had no QRP Elmers. With the advent of the Internet, I've found many like-minded Hams throughout the world and many QRP clubs, so I'd have to give credit to the Internet for being my main influence.  Again, the challenge of working other stations at 5 Watts or even milliWatts is a thrill that kW QRO Ops will never experience!

5) What is your favorite QRP activity?

Contesting. It keeps my CW skills honed, and it shows me how well my antennas are performing. This can be a major contest or a QRP Sprint; either are enjoyable. I like the competition, but I'm never a sore loser!

6) What's your favorite piece of QRP gear (past or present)?

8) What is your fondest QRP memory.

That would be working 3B9C, Rodriguez Island in the Indian Ocean, through a MASSIVE pileup while I was on Wagon Wheel Hill, elevation 1,500 feet back in the Winter of 2006. My 2nd best was working Tanzania from near Dayton Hamvention, using 2.5 Watts.

9) What other hobbies/interests do you enjoy when your not on the radio?

I was a professional organist/pianist from the age of 16 until I had a stroke in 2008. I taught private piano lessons for many years. I play the hammered dulcimer. Ham Radio has always played "second fiddle" to my music. I have a grand piano in my living room, 4 electronic keyboard and a professional recording studio.

I have hiked 1,500 miles in 2007, bicycled 60 miles per day. I enjoy traveling, especially to the mountains of New Hampshire or Colorado. I could live outdoors if not for the bugs and weather!

Thank you Ken - for being my first victim ...... err, QRP Profile!  You are indeed a very brave soul!

Seriously - a very hearty "Thank You" to Ken for sharing his Amateur Radio and QRP background with us. As I stated before, I hope to have a profile for you every month.  Ken was supposed to have been the profile for July 2013.  There will be another at the end of the month for August.

So ....... if you see an e-mail from me in your Inbox titled, "Profiles in QRP", please don't run, screaming into the night.  It will be a request for us to get the opportunity to know one of our fellow QRPers just a little bit better!

Email ThisBlogThis!Share to TwitterShare to FacebookShare to Pinterest
Labels: Profiles in QRP