I just noticed that FOBB this year falls on the same date as it did in 2009 - July 26th. The weather forecast for this year is almost the same as 2009, as far as I remember  - starting out clear with a chance of a thunderstorm towards the end. 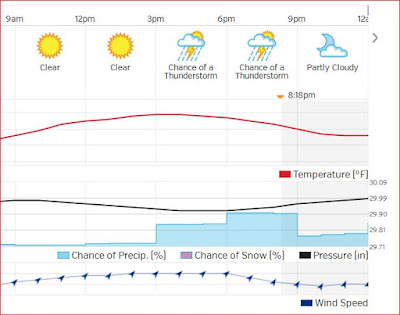 And that FOBB was memorable as I headed home 15 minutes early with the sounds of thunder rolling in - quickly.  Shortly after getting home, the storm worsened and the skies opened up. Our neighbor's tree took a direct lightning hit. Here's a photo I took that day: 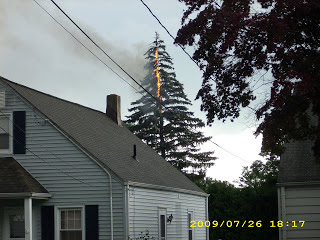 As you can guess, that tree is no more. The Fire Department successfully put out the fire, which isn't the easiest thing to do, as pine sap is pretty flammable, and the flames were pretty high up. The tree lasted another year or so before dying off completely and eventually had to be cut down.

I just hope that weather for FOBB 2015 (unlike the date) isn't a repeat of 2009. Typical Summer day around here - sunny to start, with a 50/50 shot of a boomer near the end. Hopefully the bad weather will wait until after the entire four hours are done, and I'm safely home. I can deal with the temps of near or just over 90F (32C) - but truly, lightning is no Ham's friend.