It was a VERY good night on the radio

Tonight was the kickoff to the 20 Meter QRP Foxhunt season. K2ZN in NY and NK6A in CA were the Foxes.  So if you were me, what would YOU think?  NJ to CA on 20 Meters - pretty easy right? NJ to Upstate NY on 20 Meters - tough row to hoe, right (too close)?

Al in Upstate NY was screaming in, anywhere from 559 to 599 depending on the QSB. It was like he was down the street.  Don in CA was anywhere from 339 to 559 at peaks. It was a little on the rough side, but I made it into his log. Good way to start off the season - it should be that way every week!

Before, during and after the Foxhunt, I completed the 13 Colonies Special Event. 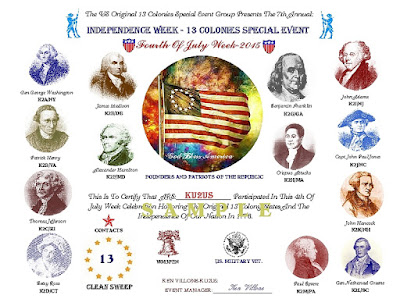 For me it was an odd mixture of QRP, QRO, CW and SSB. Not all the K2 stations seem to be on CW, so for once I had to dig out the microphone, take a deep breath and go for it.  I even made a CW contact with WM3PEN for one of the bonus stations.

I completed a clean sweep back in 2013 (I think that was the last time I used phone!), but I never applied for the certificate. For the life of me, I don't know why, but I didn't. This year will be different. Not only will I apply for the certificate, but I'll also try and get the 13 individual Colony QSL cards. I am already envisioning a very nice framed display for the shack wall.

The Revolutionary War Era is my favorite period of US History. I guess that's because where I live in New Jersey. Everywhere around me is Revolutionary War history.  Just about 3 miles southeast of me is Oak Tree Pond in Edison, where there was a skirmish between Colonial and British troops as part of the Battle of the Short Hills. About 5 miles or so north of me is the Frazee House in Scotch Plains. After the Battle of the Short Hills, General Lord Cornwallis was marching his troops back to fortifications in the Watchung Mountains. As he was passing by the Frazee house, he smelled bread that was baking in Betty Frazee's oven. Legend has it that Cornwallis demanded Betty Frazee hand over "the next loaf that comes from the oven", for him and then others for his hungry troops. Supposedly, Betty answered, "Sir, I give you this bread through fear, not love". Cornwallis was so impressed by her honesty and courage that he supposedly replied, "Then not a single man in my command shall touch a single loaf."

The Frazee House is currently undergoing renovation to restore it exactly to the way it was during the revolution, complete with all its ancillary buildings and structures. Once it's done, I think it would be a good place to hold a Special Event Station - or maybe I should volunteer to be one of the QRP CW Ops from NJ?

South Plainfield itself was known as Brooklyn during the Revolution. We were basically a milling town back then as we have numerous brooks and creeks that run through the area and they were harnessed for water power. If you go to the old Hillside Cemetery on Samptown Avenue (the oldest part of town), you can see many grave markers and tombstones from the 1600s and 1700s.