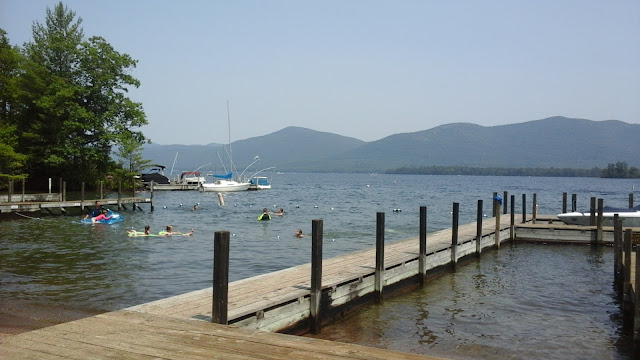 Once again, we have made our annual trek up to Lake George. But for Scorch Your Butt Off, I decided to head up to the summit of Mt. Prospect to operate. Mt. Prospect is about 6 miles from where we stay, on the opposite side of Lake George Village.

My initial set up was at the picnic grounds at the summit. I had launched a line into a pine and was about to hoist the PAR END FEDZ, when a swarm of angry black flies decided that I had too much blood and proceeded to initiate an involuntary contribution.

Not wanting to spend the next couple of hours in Nature's Blood Bank, I retreated to the parking lot. I set up the PAR with my newly repaired Jackite pole, using my home brew mast mount to keep it upright and straight.

It was a trade off. I ditched the flies with their demonic taste for blood by taking refuge on a mountaintop parking lot. Picture this ..... a black, tarred surface at a high elevation, with the hot sun bearing down out of a cloudless sky. I might as well have operated out of a toaster oven. According to WeatherUnderground, the temperature was 87F, but factoring in the humidity, it felt like 91F. Actually, it felt much hotter than that, but the "official" 91F is what I used for my exchange.

So then, why the post title " SYBO ..... not so hot"? There was no lack of heat  and humidity, but there was a dearth of activity. Mind you, there were plenty of SKCCers overrunning the QRP "watering holes" for their Week End Sprint, but not many QRPERS taking part in SYBO. At least not that I heard. I ended up working three. Marc W4MPS  in North Carolina (SPARC's Field Day guest), the ever present Jim W4QO in Georgia, and Randy K7TQ in Idaho.

Other than those three, it was pretty much "CQ WES" all over the place. And since I don't carry a straight key in my portable ops pack, I really couldn't participate. I sure hope there's more activity for FOBB and the Skeeter Hunt.