We're back from Lake George

and now it's time to settle into the mundane routine of worklife, I guess.

This came just before we left, but we were so busy, I didn't have time to scan and post: 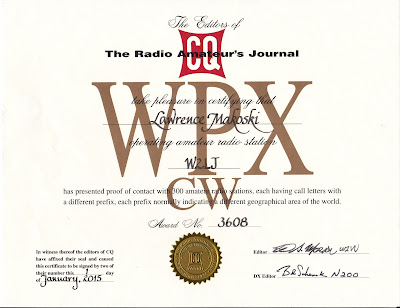 Some 7 months after my application, but at least it came in one piece, undamaged and without a crease or fold mark. I have the 400 prefix endorsement somewhere down in the shack.  I'll attach it before I frame it.

And now that we're back, that's going to be my next project, or order of business - clean out the shack. Currently, it looks like a bomb hit it. It's hodgepodge of mess piled upon mess. I want to get everything back into order again so that it no longer looks like one of those places you see on those "I'm a hoarder." TV shows.

My Amateur Radio success at Lake George was pretty "so-so". I made few contacts, but they were generally pretty good rag chews. Only one piece of DX during the week and that was with OH2XX from Finland on 20 Meters towards the end of the week.  The PAR END FEDZ worked well in the tree. Next year, I think I'll switch to the EARCHI instead. It tunes up easily on more bands.

You can tell we're definitely on the downside of the solar cycle.  Good days with lots of activity and lots of DX heard are becoming fewer and more far in between. I think the days are coming when a good QRP DX contact will be to the opposite coast!