Don't try this at home!

Before I go into today's blog post, I have to mention that for Catholics, today is the Feast Day of St. Maximilian Kolbe, SP3RN. St. Max was a Franciscan Friar who was interned at Auschwitz during WWII.  After three prisoners escaped, the Camp Commander responded by sending 10 prisoners to their deaths by starvation.  One prisoner plead for his life as he had a wife and children.  Upon hearing this, Fr. Max asked to take that man's place.  His request was granted and he was the last of the 10 to survive. Maximilian was injected with carbolic acid to end his earthly life on August 14th, 1941.


Greater love than this no man hath, that a man lay down his life for his friends.

Catholic Hams have fondly and unofficially taken St. Max on as our patron saint, the patron of Amateur Radio operators, worldwide. 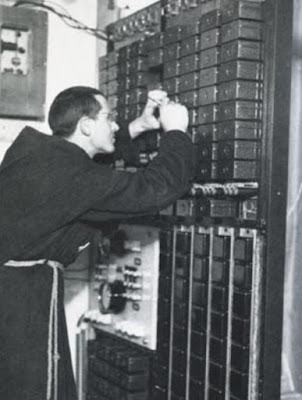 They say that confession is good for the soul - so I will confess. Yesterday, I replaced the coax running out to my Butternut HF9V.  The coax has been there for umpteen years since I put the vertical in place in 1999, about a year before my son Joey was born. It's been a while now that I've wanted to replace the coax and last Autumn, I purchased some 9913 from DX Engineering, My good intention was to run that coax out to the antenna before last Winter began.  You know what they say about good intentions.

Yesterday, the weather for the chore was about as near perfect as it gets. It was sunny, warm, but not hot, with a slight breeze and low humidity.  I began by putting on the work gloves and pulling up the old coax. It's been such a long time since I put that coax down; and I was mortified by what I discovered.

What the heck was I thinking?!?  This was coax hack job of the century! I still can't believe that I did this; and if I hadn't seen it with my own eyes, I would never have believed that I could do such a sloppy, piecemeal job. The only thing that I can think of was I was so tapped out after purchasing the Butternut, that I just used whatever coax I had on hand to get the job done.

All those barrel connectors! All that loss!  I must have had an ERP of about 2.5 Watts! It seems a miracle that I made any QRP contacts at all, let alone all the DX and states I have worked with that cockamamie set up. I am truly amazed at what a lousy job I did - EXCEPT in one respect.

When I removed the electrical tape covering up those barrel connectors and their accompanying PL-259s, they were as shiny and new looking as Day One. And I owe that to an article I read somewhere, way back when, maybe it was on QRP-L.  When I made those connections, I first wrapped the coax and the connectors with electrical tape.  Then, I covered that with a layer of plumber's putty. The plumber's putty was followed by a final layer of electrical tape.  After some 18 years, the connections were bright, shiny and there was NO sign of any water intrusion, whatsoever. And considering the coax was laying on the ground through some very harsh Winters and at least three major Hurricanes, Floyd, Irene and Sandy, that's pretty darn good.

There was one section where the jacket of the LM-213 got chewed up pretty badly from lawn mower hits.  To prevent that, this time I elevated the coax as it ran along the back fence. 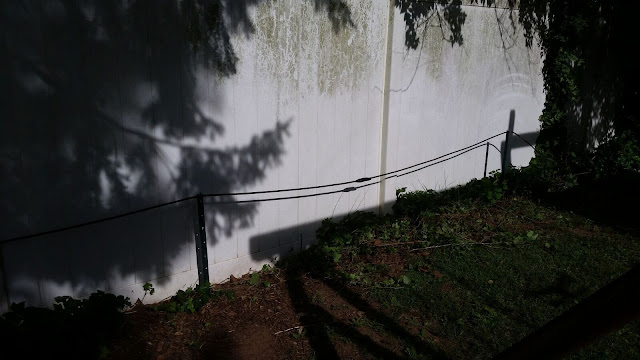 I used garden fencing stakes, spaced out at about 5 foot intervals and I cable tied the coax to the stakes to keep it off the ground and away from the angry blades of my coax eating lawn mower. Once I got to the chain link fence running along the side perimeter of the yard, I then cable tied the coax to the top tube.  My new run of one piece of 150 feet of  RG-9913 is safe and sound from gasoline powered lawn tools!  There's only one barrel connector, where the terminus of the coax meets the Butternut's matching stub. and you can see that little lump in the picture, above.  Now maybe I'll get a bit more of that precious 5 Watts into the antenna and out into the aether.

Later on, in the afternoon, after getting home from my monthly volunteer stint at the soup kitchen, I soldered on the PL-259 to the radio end of the coax.  I plugged it into the KX3 and was happy to see a VERY easy match made by the autotuner on all bands.  Maybe a 1/2 to one second "BRRRRP" by the relays in a few cases, and in the rest, there was no match needed at all.

There's peace of mind knowing that I now have a proper run of low loss coax out to my vertical.  I'm also going to change out the coax to the W3EDP.  That's a straight forward exchange, and I figure that as long as I'm doing one, I might as well do both. I'm happy to state that the coax currently running to the W3EDP is not a hack job conglomeration like what was running out to the vertical !

I'll NEVER do that again and like they say on all those shows on TV = "Don't try this at home!"

Email ThisBlogThis!Share to TwitterShare to FacebookShare to Pinterest
Labels: antennas