Once again, we were blessed with picture perfect weather for our Annual K2ETS Club Picnic. 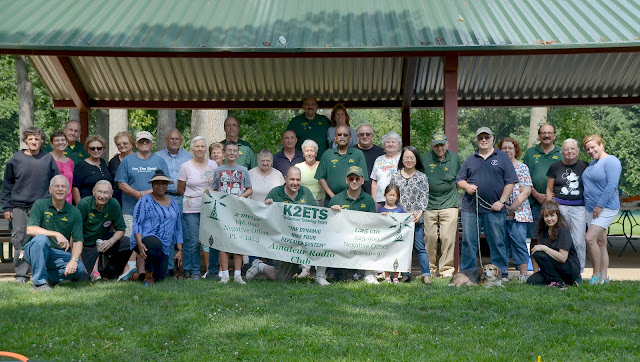 The food was excellent and the company was excellent and the day was excellent. If you look to the bottom right of the photo, you'll see Harold laying in the grass.  He was basking in the glow of the limelight yesterday as just about everyone stopped over to say "Hi" and to pet him and give him attention - and even a few treats.  I took him for a long walk and he must have enjoyed the day too, because he slept like the proverbial brick last night.

I won the picnic door prize!  Me, who hardly ever wins anything!  I won a Baofeng 2M/220 MHz dual band handheld.  My Wouxon 220 MHz HT, which I had purchased a few years ago, died recently. This is a welcome addition and I can keep tabs on our 220 MHz repeater.

But the best surprise of the day was this. 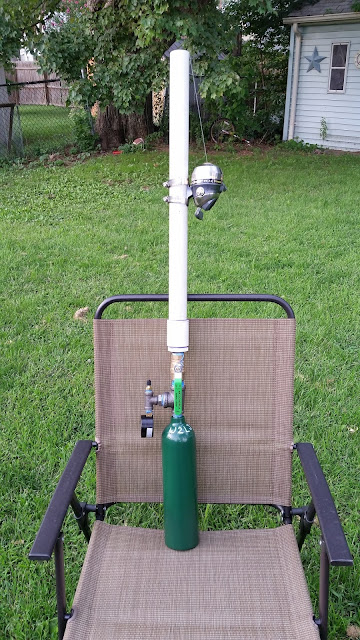 I arrived at the park early, around 9:15 AM in order to help out with setting up for the day. After sweeping out the pavilion where picnic tables were and then washing them down, it was time to put up the antenna.  Every year we throw a wire up into the trees and we bring along the club HF rig for anyone who wants to operate.  When it came time to put up the antenna, Dave KC2YRC said to me, "Come over here, we have a gift for you." I must have looked confused. He presented me with a new antenna launcher that he and his brother Dave W2OIL had made for me.  They even painted my call sign on it. To say I was gratefully overwhelmed is an understatement.

Flash back two years, when both Dan and Dave were at set up for SPARC's participation in the Rookie Roundup at Putnam Park in South Plainfield.  I was going to put up an EFHW into one of the trees; only to discover that the air chamber in my Joplin ARC antenna launcher had cracked on me when I must have dropped it at some point.  I didn't even realize it until I tried to use it that day. I ended up supporting the wire with my 31 foot Jackite pole.

Fast forward to yesterday, when they presented me with a launcher of their design with a used METAL (translate that to "unbreakable") oxygen bottle serving as the air chamber. In addition, they gave me a fancier (and much smoother) air release lever and they also installed an air pressure gauge so that I don't have to rely on the pump's gauge.

I couldn't thank them enough!  That they thought of me and had me in the back of their minds meant so much to me. These two guys, Dave W2OIL and Dan KC2YRC are the salt of the earth and have hearts of pure gold. They would do anything for anyone. They are just THE best and it is an honor and a privilege to be their friend.

Anyway, after returning home, I just had to try it out.  I went to an empty field and pumped it up to about 20 LBS of pressure and let the weight fly.  Because the air chamber is a bit smaller than the chamber of the Joplin launcher, the weight didn't fly as far.  A second shot, with the chamber filled up to about 35 LBS psi easily sent the weight over a  (my guesstimate) 70 foot tree.  That smoother release lever allows me to hold the unit steadier during launch, better enabling me to send the line where I want it to go.

By the way, during the picnic, the club station K2ETS was reasonably busy throughout the afternoon. Talking with some of the other fellows, I discovered that we had worked several Kansas QSO Party stations, as well as stations from Germany, Brazil, Georgia (the country, not the state) and Oman. Not bad for 100 Watts to an off center fed dipole sloping from about 15 feet at the low end to about 55-60 feet at the high end.