Not having worked much in the way of new DX lately, I went on over to the ARRL Website to log onto Logbook of the World. With all the chatter going on about the Ducie Island DXpedition, I had forgotten that I had worked the island twice in 2008, back when all I had was the K2 and 5 Watts.

While I was there, I wanted to see what my current country total was. 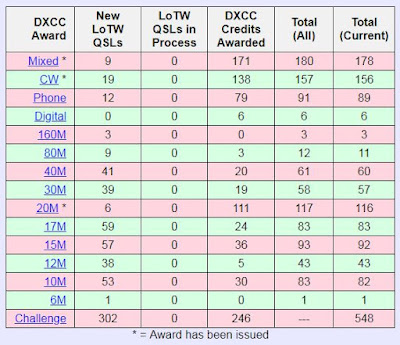 It would appear that I am currently at 180 confirmed through LOTW. I have to apply (pay) for credits for these: 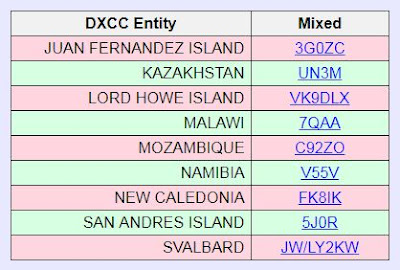 By my own count, I was at 160 countries worked via QRP. Of the ATNOs above, I'm pretty sure that New Caledonia, Mozambique and perhaps Namibia were 100 Watts QSOs. The other six were QRP, so that would bring me up to 166 worked with 5 Watts or less. I'd have to go back and refer to Log4OM to be 100% sure about that, though.

Once the sunspots come back, I'm closest to earning DXCC on 15 Meters. Only eight to go. Also, both 17 Meters and 10 Meters are close, but it's going to be years before band conditions improve enough to make those needed QSOs.  May be a retirement project at this point.