It was a mixed bag weekend, radio-wise.

I got a late start with the Zombie Shuffle. Due to not getting home from work until 6:00 PM and then dinner, I did not get started until a bit after 7:00 PM.  As the official start time was 4:00 PM local, I missed the first three hours and probably most of the activity.

I ended up working only three stations - AB9CA, NK9G on 40 Meters and N9AW on 80 Meters. I could tell there were some stations on 20 Meters, but they were at ESP level. I knew they were there and that was about it.

While talking with Bob W3BBO on Saturday evening, he informed me that he worked ten Zombie stations. He was wrapping up his operating at just about the same time I was beginning - so that right there tells me I pretty much missed the Zombie boat this year.

On Saturday, we set up at a local park in South Plainfield for JOTA - Jamboree on the Air, the annual Boy Scouts of America QSO Party, if you will. We had success working stations, but alas, no local Scout Troops came by to participate.

I think part of that was the weather - it was heavily overcast, at times misty, breezy and quite chilly for most of the time. I think the other part was that we could have done a better job publicizing that we were out there. I think for the next JOTA we will post to South Plainfield's two Facebook groups as to what we'll be doing. All the Troops in town knew, as one of our members, Harry KC2PGX, is a Scoutmaster, but perhaps social media might draw more people.

Dave KD2FSI brought a Jeep full of his portable equipment; and I brought forth my venerable portable backpack. 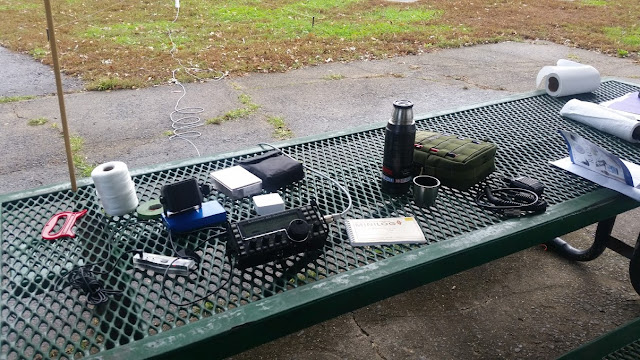 My KX3 set up at one of the tables under a pavilion. I think the most essential piece of the day was the thermos of hot coffee! To start, the coax was running out to the QRP Guys portable vertical, but after a while, I switched over to the PAR END FEDZ thrown up in a tree. I was not getting me the results I wanted wit the vertical. I should have used my Buddistick. My Jeep was close enough to where I could have just popped it on the roof with the magmount, and with a barrel connector and some extra coax I would have made it to my operating position. That setup has worked  so very well for me in the past. Too bad I didn't have the presence of mind to think of that on Saturday morning.  One of the hazards of growing old, I guess. 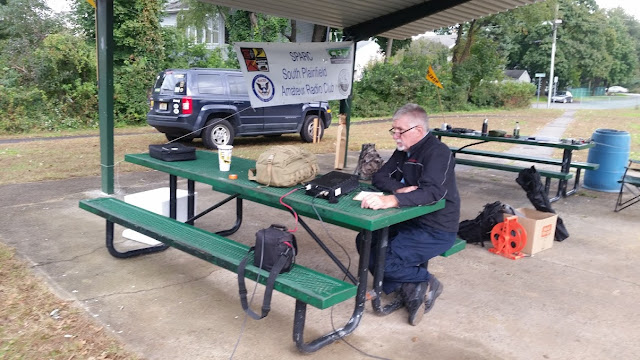 Dave KD2FSI making contacts on 20 Meters. We switched back and forth so as not to interfere with each other, but for the most part Dave stayed on 20 Meters while I stayed on 40 Meters. 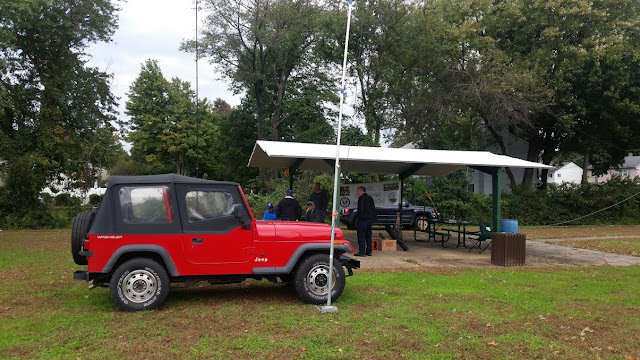 Dave's Jeep Wrangler, on top of his drive on mast. This supported his 20 Meters Buddipole configuration. For 40 Meters, Dave put up his Jackite mast with the EFHW wrapped around it. In this case, he added a Buddipole HF coil and an elevated counterpoise wire. 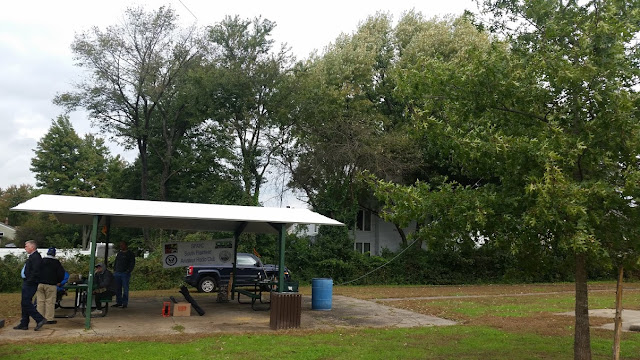 Much to my chagrin, I was not able to detect or hear any JOTA stations on CW on either 40 or 20 Meters. I brought the microphone along and used that to work the few JOTA stations that I was able to. Even though I was kind of out of my element, it was fun talking to the Scouts and I was even able to speak with a couple who were close to attaining their Eagle Scout status.

For the heck of it, I worked a couple NY QSO Party stations with the paddles, so it wasn't a total loss. And of course, as we were packing up for the afternoon, the sun started peaking through the clouds and began to warm us up. Just in time to go home.