My sister knows me

My sister is four years older than me; and she knows her brother very, very well. She's on vacation, heading towards New England and yesterday she and her husband stopped at Hyde Park to visit the Roosevelt residence.

Last night we were texting back and forth as I was wondering how far north they had gotten and if the leaves are changing. She sent me this: 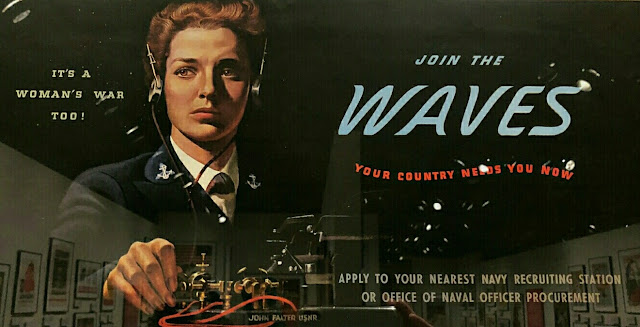 No, no, no.  Of course, I'm not a WAVE nor have I ever been in the Navy.  But from hanging around her little brother, my big sister DOES know what a bug is; and she can pick out a Morse Code apparatus when she sees one.

I've often thought that if I could somehow travel back in time, there are two periods of American history that I'd like to eyewitness. The first would be our Colonial and Revolutionary War period. I'm a bit of a Revolutionary War buff and am fascinated with that era and our founding.

The second period of time I'd love to visit would be the World War II era.  To me, it would be a gas to see what the places I know so well today looked like 60-70 years ago. To see my parents and grandparents as their younger selves would be a blast, too. My grandparents on my Dad's side of the family passed away before I was born. It would be nice to be able to meet them, even if my identity had to remain anonymous. (The sci-fi fan in me knows all about changing timelines. LOL!)

The big thing for me would be radio, of course. Television as we know it was in its infancy and was not common. Broadcast radio was the rage. Although Amateur Radio was shut down for the war - plenty of ops were performing communication duties for the military. My Dad, who had no interest in Amateur Radio whatsoever was attached to the Signal Corps and was part of the group sent to Britain to work on the RADAR development project. Maybe that's where my radio gene came from! If I was living back then, I am pretty sure that I would either be doing something like that; or if I was classified as "4F' for whatever reason, I'd probably be doing radio repair.