A rather late Field Day report

Sorry for this late Field Day report - our Field Day effort was "different' to say the least. I can confidently say that while this was not SPARC's best effort, we learned some very valuable lessons in the process which will serve us in years to come. So all was not lost.

We first started having major problems with the SSB Beam antenna. 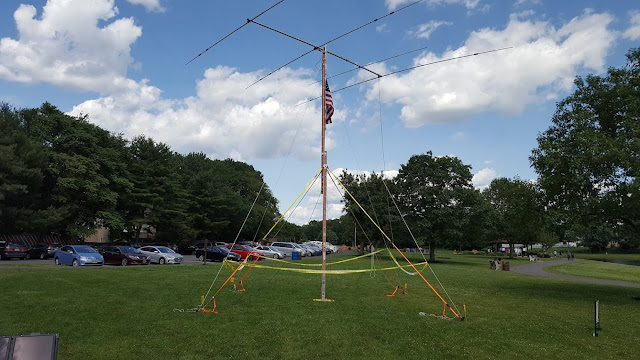 We put it together exactly the way we had in years past, but for some reason or another we kept getting wild SWR reading on the analyzer.  After 5 separate put ups and bring downs, we weren't able to get better than a 2.8:1 match on 20 Meters. When you're running the battery category with only 5 Watts out, that's way too much to let the autotuners handle. And to make matters worse, the SWR readings became unstable. They would change as we watched them. We thought perhaps it was a bad roll of coax, but we swapped that out with no effect. Must be something in the traps.

The Vadney brothers saved our bacon on this one, though. They brought their Hexbeam along and put it up to replace the Yagi, and it only took W2OIL and KC2YRC about an hour to put it up! 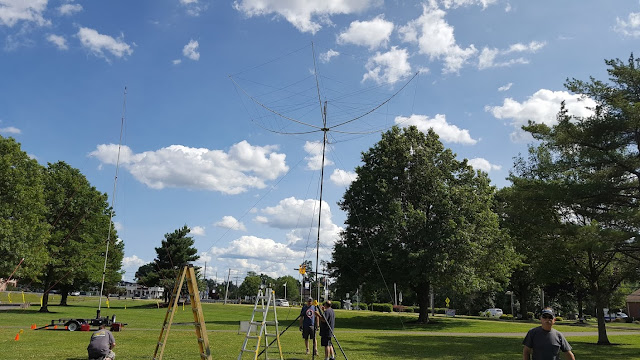 The match was 1:1 on 20 Meters - much better! And the hex performed flawlessly all weekend long.

The second problem reared its ugly head around 1:30 AM Sunday morning. The desktop we were using as a server, which was linking all our logging computers gave up the ghost. Bill W2AOF thought quickly enough on his feet to set up a new logbook file on One Drive and he directed all the laptops to the cloud.  The only bad thing was we had to rely on stations and memory to tell us if we were working a station as a dupe.  Fortunately, after the event, our tech wizards Ron N2LCZ and Drew W2OU were able to combine the two log files. I think we ended up with 4 dupes in total.

The problem is, you can't count on the cloud being there during a disaster. In fact, the internet is usually one of the first things to disappear in a large scale emergency. The internet rescued our butts this year- but we need to develop a more iron clad solution for 2020.

Our CW QSO total was WAY down this year. At around 3:30 AM on Sunday morning I was hit by either a stomach bug or a case of food poisoning (my Doctor thinks it was food poisoning from my symptoms), or something. It really wiped me out, I had a low grade fever for over a week. I stayed until the bitter end, but I have to admit I snoozed most of the last half of Field Day. Normally, I'm at that key like a fly stuck to flypaper. Not this year. In fact, almost a week and a half later, I'm just feeling human again.  I sure don't bounce back as quickly as I did when I wore a younger man's clothes.

Here's some photos to close out this post. Even with all that happened, we still had fun, we had lots of visitors and we definitely learned from our mistakes, and I'd rather learn them now than in the middle of some kind of disaster situation. 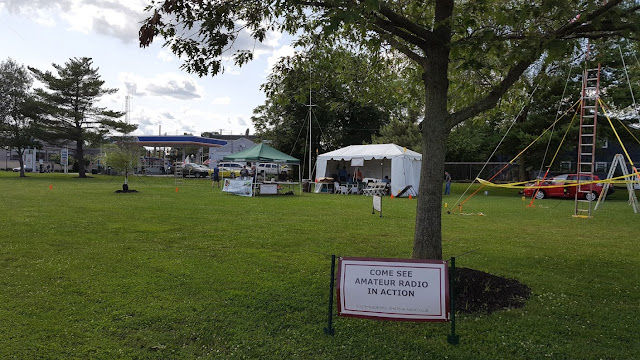 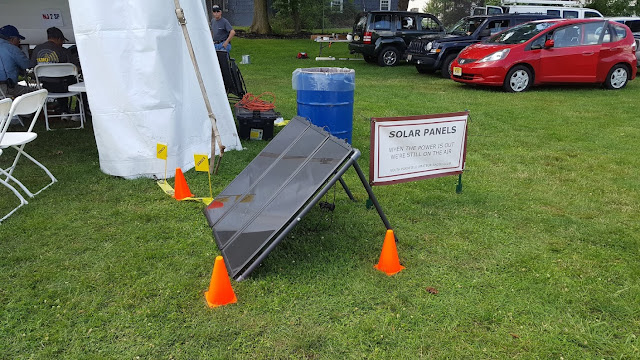 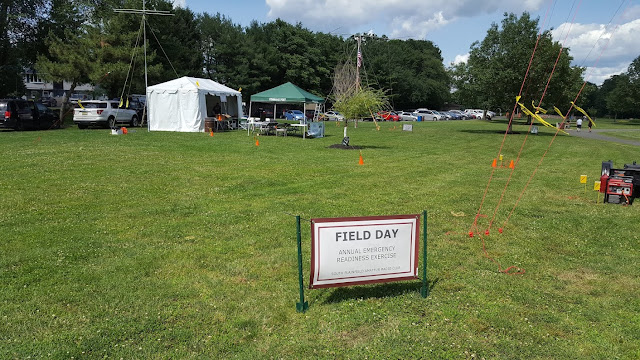 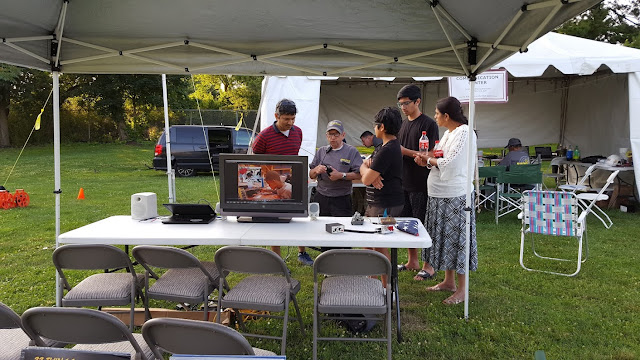 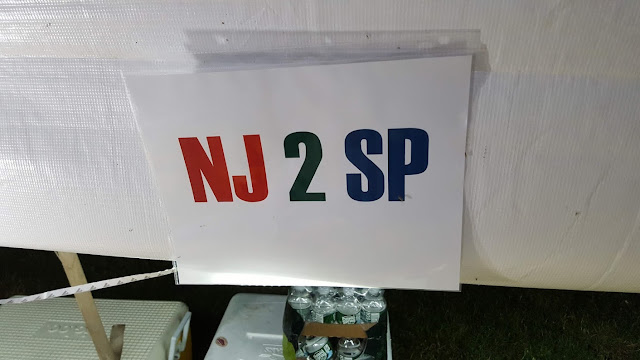 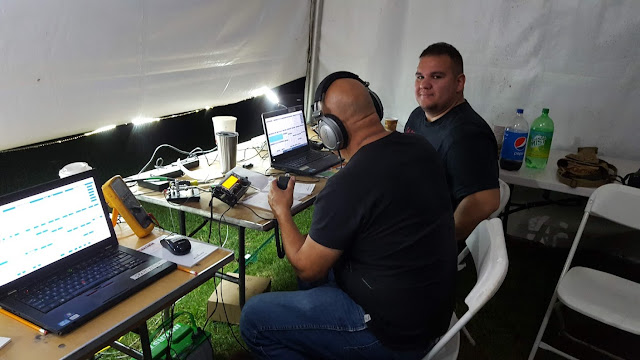 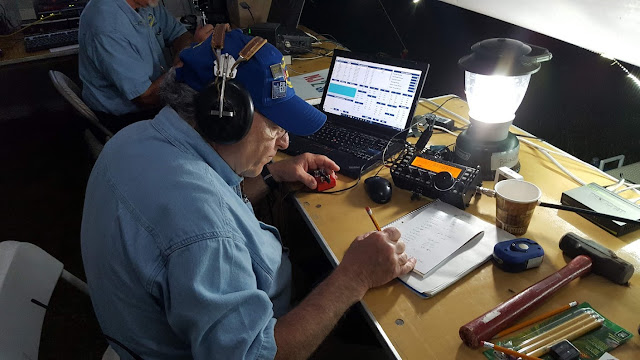 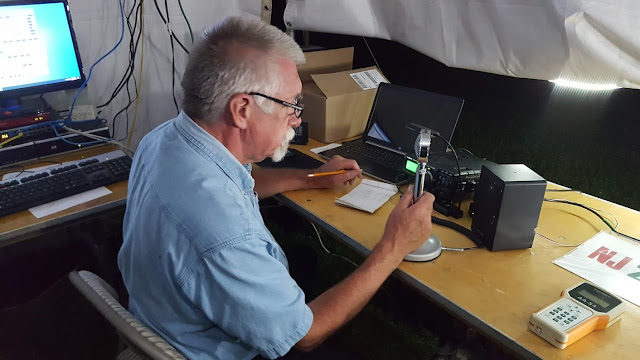 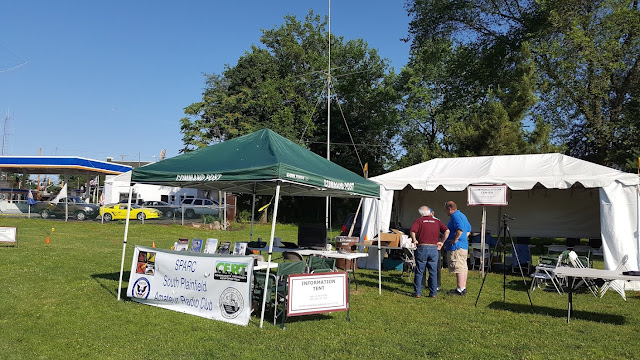 The signs were new this year - and I took this video before the stomach blues hit: