While we were on vacation last week, I finally got the chance to read the book that my sister gave me for Christmas - "Contact Sport" by Jim George N3BB. I held off reading it with the intention of bringing it along on vacation. I was not disappointed. This book is his recounting of N3BB's experiences as a driver for the 2014 WRTC Championship, which was held in New England that year. 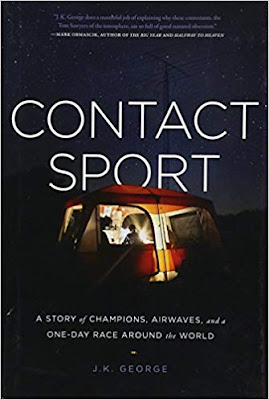 I enjoyed the book on several levels:

A) It is a book about Amateur Radio, to which I can totally relate. It was an easy read. N3BB is a talented writer and the book was written in a manner so that someone who is totally foreign to Amateur Radio could pick this book up and enjoy reading it. In the same vein, it was not overly simplistic. It held my attention throughout and was a relatively quick read

B) As pretty much a non-contester, I was impressed - VERY impressed with these "Top Guns" who qualified for the Championships. I could never do what they do. I don't have the resources or the devotion to plant my butt in a chair for 24 hours almost every weekend during contest season. These guys can do that and their experience and abilities are just amazing to me. That being said ........

C) As an avid participant in Field Day, on some levels I can relate. I can relate being to being "locked up" in a hot tent for 24 hours trying to make as many CW contacts as possible.  For the first few years of SPARC's Field Day efforts, the CW duties were left pretty much to Marv K2VHW and myself. This year we had a lot of help with that. I am hoping that continues in the years to come. Reading about these guys doing what I do once a year (of course on a much more advanced level than I could ever hope to do - Uber Field Day) was neat, because I totally "got it".

D) It turns out I actually know one of the major players in the book.  John Laney K4BAI is a familiar call sign in just about all the QRP Sprints in which I participate. I have always looked at John with major respect for his talent and abilities, and his sterling character and reputation for fairness and honesty. To read about someone I know being eminently qualified to act as a WRTC referee made the book somewhat more "personal" and brought it home for me.

E) Chapter 17 was devoted to Morse Code. A relatively short chapter, Jim attempted to explain the "magic of Morse" to those not familiar with the mode. IMHO, this was the best chapter of the book - but then again, I AM biased!

If you get a chance to pick this up in your local library, or order it from Amazon, I would recommend it. It's a fun read about something that all the readers of this blog enjoy - Amateur Radio. I had no idea this book was out there. I thank my big sister many times over for gifting it to me.