Fishing at the Lake

When we come up to Lake George for our annual Summer respite, we notice that a lot of folks come up here for the fishing.  Throughout the day, you see people going to their boats; or coming back from their boats, with rods, reels, tackle boxes and other sundry items in hand.

I like to fish while I'm up here, too. My kind of fishing is different however. Instead of plying the waters of the lake, I ply the layers of the ionosphere. Instead of looking for blue gills, bass, carp and sunfish, I look for call signs. In a way, the two activities are a lot alike.

Instead of rod and reel, my equipment is my KX3 and my home brewed magloop.  I could set up an EFHW or perhaps the Buddistick, but the magloop offers rapid set up and take down while maintaining relative stealth. I try to stay in the good graces of our host here, and don't wish to do anything that he might deem as "not permissible".  Throwing a wire into a tree would definitely be pushing the envelope, all though I have done that in the past. The owner has never complained, but some of our fellow cabin dwellers can be a bit "catty" if you will, at times. Why press your luck if you don't have to? 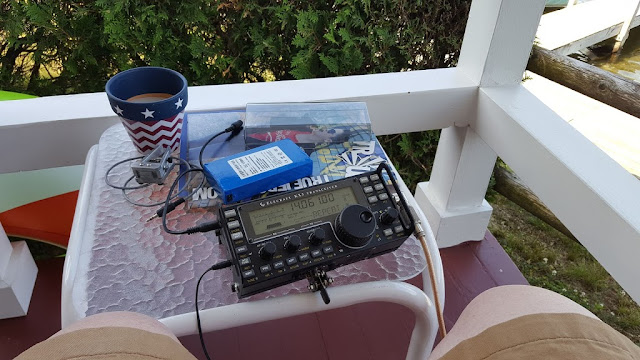 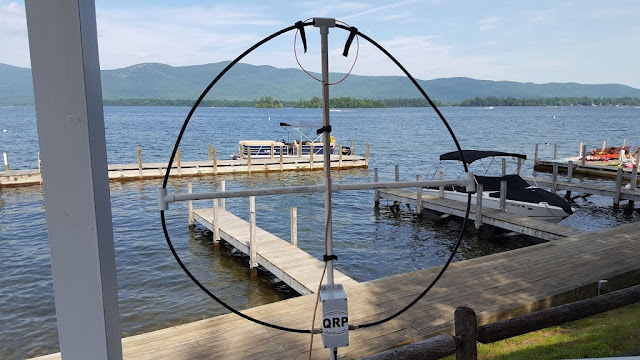 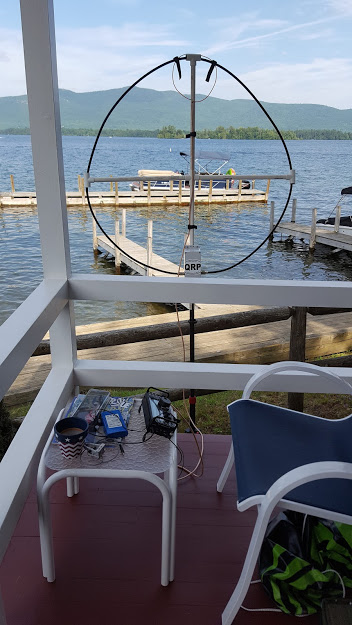 I got on both 20 and 40 Meters yesterday. Activity wasn't the greatest; but I did make some contacts. I worked a W8/G station that I thought might be visiting the States on holiday. He was calling CQ with no takers and I just wanted to assure him that his signal was loud, and was getting out. Turns out he was in fact, in England, in Newcastle. But he was remoting through a station in Michigan via the internet. Sigh - DX that doesn't count.

I switched to 40 Meters and worked several CW Ops that were participating in the 1900 hour CWT, one of their weekly CW Sprints. I worked four stations, all in Virginia. For whatever reason, I seemed to have a pipeline to VA. I worked all on the first try - a testament to their antennas and ears - but also a testament to the magloop. It works, and pretty well at that.

Then I heard my buddy W3BBO working K3TF.  Bob was a solid 559/569 with some QSB. I waited for their QSO to end. Bob said he had to run at the end of his conversation with K3TF. He really did have to QRT! I called him a couple of times with no joy. A subsequent e-mail revealed that Bob had been told that dinner was ready, so that was that. Maybe another day.

Getting back to the analogy of fishing and Ham Radio. I have often commented on how the two are so similar. They both involve skill, smarts, knowing your equipment, but most of all, perseverance, especially for QRPers. If all you know is QRO, and then switch to QRP, you have to switch your mindset as well as your power setting.

Patience is not only a virtue, it is a necessity if you decide to become a dedicated QRPer. The contacts will come, but it will definitely be different than making them with brute force. You'll need to intimately understand propagation, timing, your equipment and yourself. And most of all, you'll need to understand the importance of listening and how that plays into the scheme of things.

Yeah, it's way easier to make those contacts with 100, 500 or 1,500 Watts. But IMHO, at least, it's nowhere near as satisfying.  When you get to the point where you can bust a pileup or make that contact with Japan or Australia the first time you try with 5 Watts, that's Ham Radio heaven.