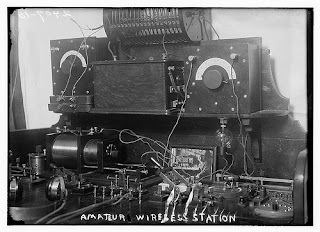 and Hams were fidgety and nervous!

A link to the Library of Congress and this photo appeared on QRP-L the other day. The photo is of a spark gap transmitter circa 1910 - 1915.

This is our heritage! This is when homebrew was the order of the day and there were kiloVolts present at the Morse Code key. And you wondered why those Navy keys are called flameproof!

Those Old Timers would more than likely think we're a bunch of wimps and sissies with the stuff we use to get on the air with today.

Tonight, 40 Meters was back to its accustomed mess and 80 Meters was dead. I knew I was in trouble when I heard two relatively close by Hams, N2ESE and N2WJW calling CQ on 80 Meters and they were each about 449 respectively. Normally, those two fellows have great signals on 80.

I was disappointed about not making a QSO tonight; as I desperately wanted to try a new little gizzmo that came through the mail today. I recently purchased an ExtendaDot from Frank W7IS. This little device fits over the dot arm of a bug and allows you to slow it down. The vintage Vibroplex Original Standard that I restored and use most of the time goes at the blazing speed of about 40 WPM with a single weight in a normal position. It was explained to me that the WWII era bugs had very stiff main springs and that this is normal for Vibros made in the mid 1940s.

I was using an extra large weight and a part from a view camera to slow down my bug. The "Rube Goldberg" that I put together did the job; but for some reason the code didn't sound "smoothe". I think all the weight I was using made for a herky-jerky sound. The ExtendaDot is brilliant. I took the weight off altogether and installed Frank's device. Now I can get the bug to send at about 20 WPM quite easily, and maybe it's just my imagination; but I think the Code that I generate now sounds smoother and flows better.

I've stated before that one of my goals is to become as proficient with a bug as I am with a keyer and paddles. Frank's ExtendaDot is going to go a long way towards making that a reality. If you have a bug that you've always wanted to use; but were daunted by its speed then take a look here. So far, I am very happy with my ExtendaDot.

BTW, I had to report for jury duty today. Here in Middlesex County in the state of New Jersey, our jury duty system is "one day, one trial". You report to the County Courthouse; and if you're not selected to be on a jury the day you report; then you go home at the end of the day. If you are selected, then you sit on that jury for however long the trial lasts. The majority are a day or two; or sometimes maybe three. Certain trials can go a lot longer than that; and a bunch of us were a bit nervous as they were looking to seat a jury for a criminal trial that was looking to last three weeks.

Anyway, it was a long day sitting in the prospective Jury Pool room - 8:00 Am until 4:30 PM with not much to do. I brought a bunch of QSTs, WorldRadio magazines and my Palm Tungsten E loaded up with a bunch of KE9V's "Long Delayed Echoes" podcasts. It made the day go by a little bit quicker. It was nice when a guy caught sight of my magazines and asked me if I was a Ham. A positive response from me brought an introduction from him along with, "I'm a Ham, too!".

It turns out that he's an inactive Ham, who has been that way since his antenna blew down in a Winter storm a few years back. Our conversation was a good one; and I certainly hope I re-sparked the embers; and got him sufficiently interested enough to give it another shot. It turns out that he's a retired engineer and one of his jobs was to help design and build the microwave transmitters that went on the Voyager spacecraft. A guy like that should be on the air having QSOs. He was telling me that he didn't want to put up anything obtrusive as the neighbors tended to give him heat over his last set of antennas. Of course I put in the good sales pitch for QRP and simple wire antennas!

As it turns out, I didn't get selected to a jury this time around.