I can now bring up my QRP DXCC country (entity) count up to 97 worked. I worked two new ones today. Actually, they're not new as I have worked these countries before; but they are new since going totally QRP back in 2003.

I worked El Salvador YS4/DF7OGO and Columbia HK4CZE on 20 Meters this afternoon. Both were worked with 5 Watts to the G5RV. The El Salvador QSO was a little on the tough side with a lot of fills given on my part. The Columbia QSO was relatively easy. Jorge gave me a 579 and in neither case did I mention I was running QRP.

In fact, I really never mention in QSO that I am running QRP. It really doesn't make a difference to the receiving station - they either hear me well enough to work me; or they don't. As much as I like QRP, it's a personal satisfaction thing for me; and I see no point in hitting anyone over the head with it.

The bands are pretty quiet now - the calm before the storm. In just under two hours, the bands will probably become utter mayhem for the next two days. Hopefully, in that amount of time, I will work three more "new ones" to bring my QRP DXCC count up to 100. Then, I can file for that really neat looking ARRL award. 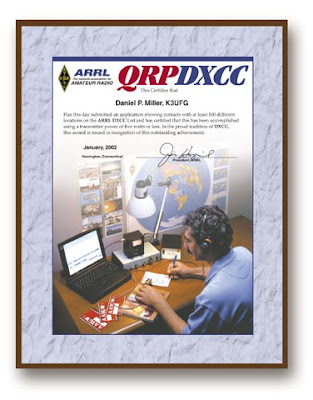