It all started the year I was born. When I was a mere 5 months old. our friends in Russia launched Sputnik. I am told that Amateur Radio operators the world over listened to the "Beep, Beep" of its beacon on their shortwave receivers. The "space race" was born and little did I know, as a tiny infant, what a big role that both Amateur Radio and that space race would play in my life.

Some of the earliest and most vivid memories that I have were watching the televised launches of both Alan Shepard and John Glenn on their history making flights.  By the time I got to grade school, Program Mercury was ending and Project Gemini was taking its place. I was hooked! I followed each mission with the zeal that only a kid can muster.

And then, when I was 12 years old ....... 49 years ago on this very day, we sat glued to our TVs to watch these ghostly images of Neil Armstrong and Buzz Aldrin walk on the Moon for the very first time! 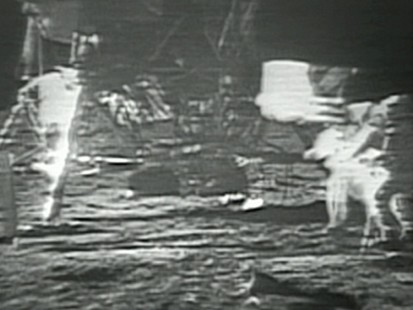 What a time to grow up in! Back then it was like we could do anything we put our minds to. I think in the 70s we lost a lot of that child like innocence and the reality of national budgets, changing national priorities and the "lack of will" came crashing down.

Hmmmmmmm ........ I wonder how many Hams worked on/in/for the Space Program back in those days?  I'm willing to bet "a lot"!