For those readers who are not from the USA - we have a saying here. When you're a kid, and you don't go to school when you're supposed to, but you go off and do something else that you would rather do - it's called "playing hooky".

I played hooky in more ways than one last week. First off, it was our yearly family pilgrimage to Lake George, NY, so I was on vacation and was "playing hooky" from work. At least it was an excused absence!

Secondly, I did bring the radio gear along; but I have to confess I did not use it much at all. This vacation was markedly different from the past ones. With Joseph and Cara being teenagers now, my time was not spent trying to keep them entertained. They are capable of doing that for themselves now. So I spent my time mostly "vegging", and "playing hooky" from radio, and just about everything else! . I listened to music, enjoyed the view and the fresh mountain air and napped - a lot! It was fantastic. If I felt like doing something, I did it. If I didn't feel like doing anything - I didn't. I was a real lazy bones all week. I can't remember the least time that I had the opportunity to do nothing - and boy, did it feel great!

I did break out the gear on Tuesday and Wednesday.  We had some thunderstorms come through the area on Tuesday morning; but it cleared out and was bright and sunny in the afternoon. Unfortunately, the bands were dead in the afternoon. I worked my bud, Bob W3BBO on 40 Meters, but it was a real shorty QSO. We gave each other 339 reports. he was using his new to him HW-9 and it sounded good. We were both too weak to carry on a QSO of any length or substance, though.

Later as it got closer towards evening, 20 Meters started to open. I began to hear several loud DX stations from Portugal and England and Russia and the Ukraine. I managed to snare UX1RX that evening.  5 Watts from Upstate NY to the Ukraine with a magloop - not bad! 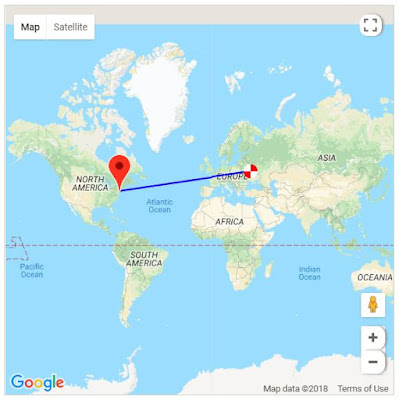 As an aside, two of my cabin neighbors were curious as to what I was doing and what I was using. I had the chance to explain all about Amateur Radio and QRP. Both were fascinated when I told them it was possible to work stations around the world using less power than a nightlight. So now, every time the one cabin neighbor sees me, he calls out "CQ CQ".

Knowing that the bands were dead during the day and not open until the evening was kind of an inconvenience and a disappointment.  Just as the bands were opening, it was usually time to make dinner, or go out and eat and spend some family time together. But that's what a family vacation is all about and I didn't want playing radio to interfere with or spoil those opportunities.  As my children are growing older and becoming college age, I know I won't get many more vacation opportunities like this.  They'll have their own lives to deal with and family vacations where we're all together will become more and more scarce.

Radio can wait - family comes first. Besides, Dad will have his opportunities to play in both the FOBB and Skeeter Hunt, which are coming up soon!