An answer to a question

came today in the mail. You may remember me wondering if Paul W0RW was pedestrian mobile when I worked him during FYBO. He was! I got a photo QSL card in the mail confirming the fact.

Paul was at Pikes Peak and was using his PRC319 military portable radio with a 10 foot whip at 5 Watts. He gave me a 599 report (handwritten).

In the photo he was quite bundled up and the snow cover in the foreground looks pretty deep. I will try and hook up the scanner to the shack laptop later to see if I can possibly scan the card and post it here. 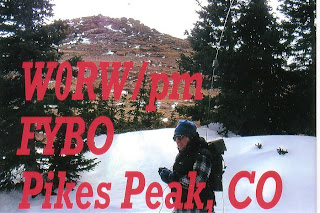 There! I managed to scan it in. Thanks for the card, Paul!