I woke up this morning to find that everything outside was covered with a white, puffy blanket of snow. From the second floor of the house, where our bedroom is, it looked worse than it turned out to be. I got dressed and headed outside to clean the cars off and shovel, so that my wife Marianne could leave for the hospital, where she is a dialysis nurse.

I took a yardstick out in the back yard, found a clear, undisturbed spot and measured only about three inches (7.5 cm) of snow. I'll take that any day compared to the 6-14 inches that they were predicting. Of course, it hasn't quite stopped yet, and unless heavier snow bands come through, I can see us only getting another inch or two, max. 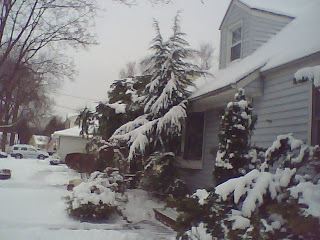 Some friends that I have in Virginia, whom I keep in touch via Facebook (gasp! ..... yes, Facebook!) have informed me that they have gotten over 20 inches of heavy, wet snow. Last night, the meteorologists on the local news, were explaining that the reason the snow was delayed in our area is that our air was so relatively dry; and that radar showed that it was already snowing, but that the snow was actually not making it to the ground. And I guess they were right, because unlike Virginia, our snow was not heavy and wet, it was very light and powdery. It was really not that much of an effort to clear using the snow shovel. Of course, the toughest part was clearing out the end of the driveway, where the snow plows had left a wall of snow. But even that wasn't so bad compared to other snow events we have had.

Anyway, even though the snow is tapering off, I will not be participating in FYBO from outside. The winds are quite gusty (up to around 20-25 MPH) and there is a lot of blowing snow, which makes it difficult to see at times. Not an ideal situation. If it weren't for the winds, I'd have it not too bad, as the patio table is cleared off and would provide a nice operating platform. Instead, I will give up the X5 multiplier (it's only 25F outside) , for the X2 multiplier as it was 57 degrees down in the basement the last time I checked.