Too good to be true?

Looking at my G4ILO propagation box, I see the SSN is up to 15, but more importantly, the solar flux value is creeping a bit higher towards that 75 - 80 mark. Could it be that Ol' Sol is reawakening from the little snooze he's been taking ever since that last geomagnetic disturbance? Values fell like the stock market after that episode. It would be nice to see the values back up there for the "Summer Kick-Off" Sprints next weekend.

The other "buzz" that was generated at Dayton, which I noticed, but failed to report about here (until now), is that Ten Tec has introduced two new trail friendly radios into their line. They look identical to the Chinese HB-1A, with the exception that they are dual band models. You can choose from either 40/20 Meters or 40/30 Meters. 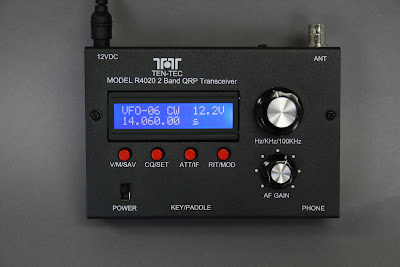 There is no built in tuner; but there is built in "general coverage" receiver coverage between 5 to 16 MHz. The output is 5 Watts, a built in keyer, RIT, built in crystal filters, and a memory that will allow you to store 20 frequencies. The power consumption on receive is a low 55mA or there abouts; and 550 - 950 mA on transmit (depending on your power supply voltage).

The scuttlebutt on QRP-L is that this basically IS the HB-1A. However, to acquire FCC type acceptance to be sold by a US marketer, that the rig had to be reduced to a dual bander and that the output filtering had to be tightened up.

Two of these were awarded that the FDIM banquet., one of each model. Also, these are not kits, they are finished transceivers. The price, as of now, is $249.00.

I definitely would not mind having one of these puppies. According to the Ten Tec Website, they are out of stock; but will be shipping this month.