Here it is, almost 10:00 PM local time and it is still 87 F (30C) outside! It reached just shy of 100 F (37C) today and promises to be even hotter tomorrow. So it seemed that discretion was the better part of valor, which dictated a nice trip to my cool basement shack, where the temperature remains a pretty constant 69 F (20C) throughout the summer.

The trip yielded two nice ragchews on 40 Meters - the nice part just above 7.100 MHz. The first was with John WB4OFT in Advance, NC. John was using a Kenwood TS570 to and Inverted Vee. He had a nice 599 signal. He is SKCC 958 was was using a Schurr hand key. As mentioned, we exchanged SKCC numbers, and I think he was a bit taken aback by my low number (49), which caused him to ask for it again. John and I are pretty close in age, only two years apart; but John has been a Ham for eight years longer than me.

After bidding our 73s, I tuned down the band just a few KHz and called CQ, as John was being tailended by another station. My CQs yielded a call from Gary VE1/K3OMI. 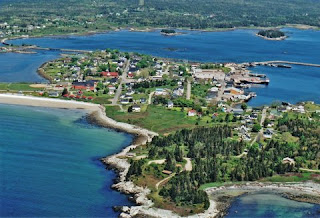 Gary was operating from his summer home in Lockeport, NS and was using an Icom IC-7000 to an Inverted Vee up at 35 feet. Gary informed me that it was hot today in Lockeport with a high temp of 80F (26C). A far cry from the hot and humid weather in NJ. And from the looks of the above picture, Lockeport looks to be a really beautiful summer home location.

I haven't had the opportunity to sit down and ragchew for quite a while, it was nice to pound brass in a leisurely, conversational manner.